VIENTIANE, Sept. 7 (Yonhap) -- President Park Geun-hye and her Japanese counterpart Shinzo Abe on Wednesday held a summit in the Laotian capital of Vientiane to discuss North Korea's provocations and other bilateral issues.

Their summit came amid the communist state's unrelenting saber-rattling, including its launch of three mid-range ballistic missiles Monday and a submarine-launched ballistic missile test last month.

The latest missile tests threaten the security of both South Korea and Japan, as some of them were found to have landed within Japan's exclusive economic zone in the East Sea.

Wednesday's summit with Abe capped Park's brisk diplomacy with the four major powers, including the United States, China and Russia, to strengthen international unity against Pyongyang's nuclear and missile programs.

During the summit, the two leaders are also expected to discuss the progress in the implementation of last year's deal between Seoul and Tokyo to settle the thorny issue of Japan's wartime sexual enslavement of Korean women.

Japan has recently wired 1 billion yen (US$9.6 million) to the South Korean side to fulfill its part of the landmark deal. The fund will be used to heal the psychological scars of the victims and restore their honor under the Dec. 28 deal, Seoul and Tokyo have said.

Wednesday's summit is the third between Park and Abe. Their last meeting was held on the sidelines of the Nuclear Security Summit in March. 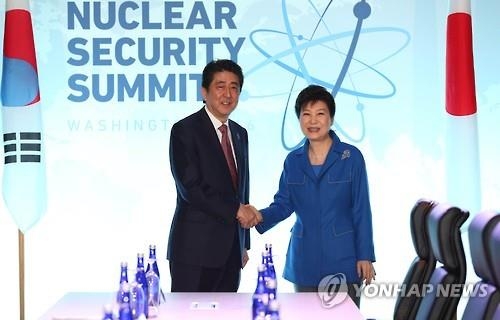