VIENTIANE, Sept. 7 (Yonhap) -- The leaders of South Korea and Japan agreed Wednesday to strengthen their trilateral cooperation with the United States in countering North Korea's nuclear and missile provocations, amid Pyongyang's unrelenting saber-rattling.

During their summit in the Laotian capital of Vientiane, President Park Geun-hye and Japanese Prime Minister Shinzo Abe also agreed to develop their conflict-laden relationship into a "future-oriented" one based on the "positive momentum" arising from their agreement last year to settle the thorny issue of Japan's wartime sexual enslavement of Korean women.

Their summit came amid the communist state's continued provocations, including its launch of three mid-range ballistic missiles Monday and a submarine-launched ballistic missile test last month.

"While North Korea's advancement in its nuclear and missile capabilities poses a serious threat to both South Korea and Japan, I hope that our two nations can more closely cooperate in responding to the North's such provocations and in denuclearizing the North," Park said during her opening remarks.

Park held the summit with Abe on the sidelines of multiple meetings with the leaders of the Association of Southeast Asian Nations, capping her brisk diplomacy with the four major powers, including the United States, China and Russia, to strengthen international unity against Pyongyang's nuclear and missile programs.

Upbraiding Pyongyang for its latest missile provocation, Abe called it "indescribable violence" and stressed the importance of cooperation between Seoul and Tokyo to cope with the recalcitrant regime's persistent military threats.

During the summit, both Park and Abe took note of a perceived improvement in bilateral relations, underscoring the need for both countries to capitalize on it to move forward the relationship that has been strained due to long-simmering historical and territorial feuds.

"With you, president, (I) would like to enter a new era of Japan-South Korea (relations) by developing future-oriented cooperation," Abe told Park.

The two leaders discussed the progress in the implementation of last year's deal between Seoul and Tokyo to put to rest the issue involving the so-called comfort women, who were forced by Japan to serve at frontline military brothels during World War II.

Under the Dec. 28 deal, Seoul has established a foundation to support South Korean victims. As part of the deal, Japan has recently wired 1 billion yen (US$9.6 million) to fund the foundation.

During the summit, Park called on Abe to continue cooperation to quickly restore the "honor and dignity" of the victims and heal their psychological scars through the foundation.

A total of 238 South Korean victims have been officially registered. Currently only 40 of them are alive after most have died of old age.

Wednesday's summit was the third between Park and Abe. Their last meeting was held on the sidelines of the Nuclear Security Summit in March. 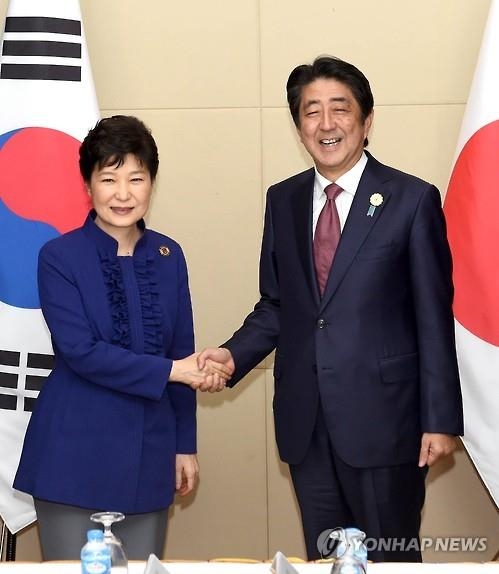