SEOUL, Sept. 7 (Yonhap) -- South Korea have fallen to third place in their group after two matches in the final Asian World Cup qualification round.

Uzbekistan have jumped out to first place with two straight victories in Group A in the last Asian qualification stage for the 2018 FIFA World Cup in Russia. After beating Syria 1-0 at home last Thursday, Uzbekistan edged out Qatar 1-0 on the road Tuesday.

South Korea opened their campaign with a 3-2 win over China at home last week but settled for a scoreless draw with Syria on Tuesday.

Iran also have a win and a draw after two matches – a 2-0 victory against Qatar and a 0-0 draw with China -- but Iran are in second place over South Korea thanks to superior goal difference, plus-2 to zero.

China and Syria each have a draw and a loss, while Qatar have suffered two losses to drop to last place.

There are 12 teams, divided into two groups of six, in the final round. The top two teams from each group will earn automatic berths to the World Cup. The two third-place nations will meet in a playoff. The winner will take on the fourth-place team from the fifth round of the Confederation of North, Central American and Caribbean Association Football (CONCACAF) qualifiers in a two-legged inter-confederation playoff for the final chance to make the World Cup.

In Group B, Australia and Saudi Arabia are in first and second with two consecutive victories, followed by Japan, the United Arab Emirates, Iraq and Thailand. 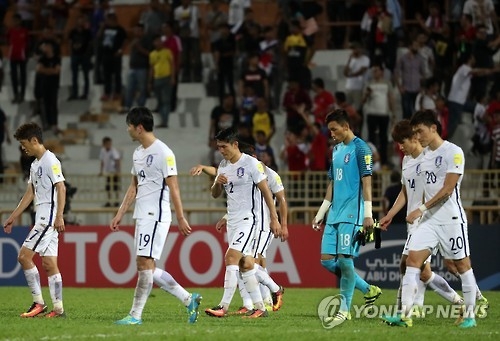 S. Korea fall to 3rd in group in final World Cup qualifying round

S. Korea fall to 3rd in group in final World Cup qualifying round