SEOUL, Sept. 7 (Yonhap) – The deployment of a U.S. missile defense system in the country should be discussed at the National Assembly, urged the minor opposition People’s Party Wednesday, adding that President Park Geun-hye should make more efforts to listen to the opposition bloc on the issue.

"Every conflict taking place in the country converges in parliament. Even today, the National Assembly is always noisy, but that is how it is supposed to be," Park Jie-won, the interim leader of the minor party said in a parliamentary address.

"The Terminal High Altitude Area Defense (THAAD) dispute should also be brought to the table in parliament," the four-term lawmaker added.

The deployment of the THAAD system in South Korea has been a major source of dispute among parties.

While the conservative Saenuri Party stresses the system is vital in coping with Pyongyang's provocations, opposition parties say the battery will be ineffective in protecting the country and adversely affect relations with neighboring countries.

The South Korean government has maintained the deployment does not need to win approval from the National Assembly.

"Only after we reach a conclusion in parliament can we persuade the United States or China of our actions," Park added. Beijing and Moscow have expressed strong concerns over the deployment of the U.S. system on the Korean Peninsula.

The interim leader added the government should also come up with viable measures to tackle sluggish economic growth as well as the falling birth rate. 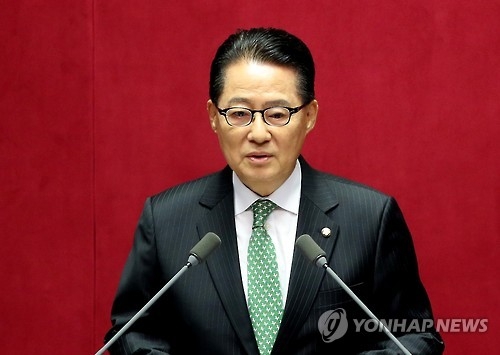