Oh still picked up his 16th save of the season at PNC Park in Pittsburgh on Tuesday (local time), as the Cards hung on to beat the Bucs 9-7 in the wild one.

Kang hit a solo shot off Luke Weaver of the Cardinals in the bottom of the fourth, matching the 15 homers that he hit as a rookie last year.

Kang added an RBI with a single in the four-run fifth, as the Pirates went ahead 6-5.

The Pirates' closer Tony Watson imploded in the top of the ninth, however, giving up three home runs with two outs as the Cardinals retook the lead at 9-6.

It set the stage for Oh, who retired the first two batters. Kang then stepped up and drilled a 0-2 fastball for his second home run of the game.

Kang had gone 0-for-2 against Oh this season before the home run. Both players had starred in the Korea Baseball Organization (KBO) before reaching the majors. At home, Kang was 4-for-13 with a home run and two doubles, along with three RBIs, against Oh.

Kang's two-homer day wasn't enough to stop the Pirates' slide. They've now lost eight in a row to fall to 67-69, while the Cardinals moved to 73-64 and held down the second wild-card spot in the National League. The New York Mets are one game behind, and the Pirates are 5.5 games out. 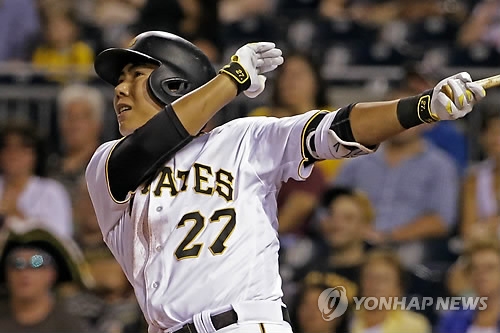 Kang went 3-for-5 with three RBIs and three runs scored. He didn't start his season until early May after recovering from leg injuries sustained last September. He was then placed on the 15-day disabled list on Aug. 20 with a left shoulder injury.

Kang came off the bench in his first game back on Monday and was making his first start since the DL stint on Tuesday.