ULSAN, Sept. 7 (Yonhap) -- An independent lawmaker was summoned Wednesday over allegations he violated the local election law in the runup to April's general elections, as prosecutors accelerated their investigation into offenses committed during the campaigning period.

Yoon Jong-o appeared before the Ulsan District Prosecutors' Office on charges of using campaign offices other than the one officially registered with the local election authority, which is against the law here.

The summons came about five months after prosecutors raided Yoon's offices in the southeastern coastal city of Ulsan and launched their investigation into the 53-year-old lawmaker.

The summons was the latest in a series of probes being carried out by prosecutors nationwide, as the statute of limitations for the offenses committed during the elections is slated to expire in mid-October.

On Tuesday, the ruling Saenuri Party lawmaker Kwon Sok-chang was called in by the Jecheon branch of the Cheongju District Prosecutors' Office on suspicions of receiving illegal political funds from local businessmen last year. 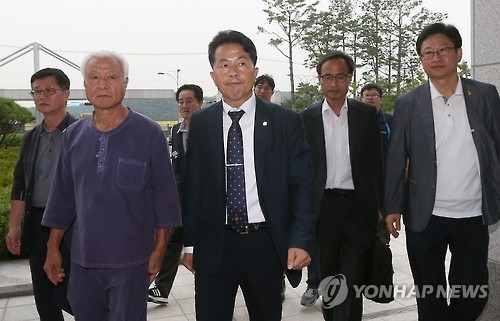