SEOUL, Sept. 7 (Yonhap) – The order backlog held by South Korean shipyards fell to the lowest level in over 12 years in August amid a protracted slump in the global shipbuilding sector, industry data showed Wednesday.

According to the data compiled by global research firm Clarkson Research Services, the shipbuilding order backlog held by Hyundai Heavy Industries Co. and its other local rivals stood at 23.31 million compensated gross tons (CGTs) as of end-August, the lowest since October 2003, when the comparable figure was 22.56 million CGTs.

South Korean shipyards accounted for 13.4 percent of the shipbuilding orders placed around the globe in total in the first eight months of the year, while the comparable figures for Chinese and Japanese rivals were 38.3 percent and 12.1 percent, respectively, they showed.

The shipbuilding industry, once regarded as the backbone of the country's economic growth and job creation, has been reeling from mounting losses caused by an industry-wide slump and increased costs.

The country's top three shipyards suffered a combined operating loss of 8.5 trillion won (US$7.4 billion) last year due largely to increased costs stemming from a delay in the construction of offshore facilities and the industry-wide slump, with Daewoo Shipbuilding alone posting a 5.5 trillion-won loss.

The shipbuilders have recently drawn up sweeping self-rescue programs worth 10.35 trillion won in a desperate bid to overcome a protracted slump and mounting losses. 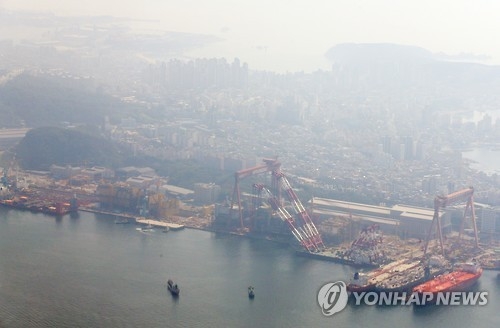