North Korea's successful launch of the SLBM was a "phenomenal" victory at a time when the 200-day campaign of loyalty reached its halfway point, according to the Rodong Sinmun, an organ of the ruling Workers’Party of Korea (WPK).

In late August, the North's SLBM flew about 1,000 kilometers toward Japan, marking the longest flight by such a missile launched by the country. North Korean leader Kim Jong-un called the launch "the greatest success."

After the WPK congress concluded in May, the North kicked off the 200-day campaign of loyalty the following month in a bid to implement the five-year economic development strategy unveiled by the North's leader.

The hard-work campaign is North Korea's way of mobilizing people to maximize production in a set period of time.

The 200-day drive marked the second campaign that the communist country has waged so far this year. In February, the North launched a 70-day drive to prepare for the WPK congress. 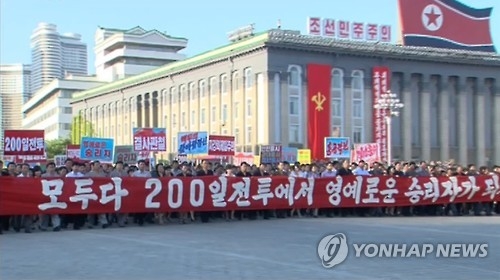 "Phenomenal victory and accomplishments including the successful test of the SLBM have given fear to imperialists bent on carrying out a fresh nuclear war," said the newspaper.

It said that the 200-day work campaign means not only a drive for more production but also a struggle to defend socialism.

"All workers, party officials and people should bear in mind that the 200-day campaign is an important gauge to test their loyalty and will to act," the paper said.

In July, North Korea claimed that the country's industrial production exceeded its target in the first month of the implementation of the hard-work drive.