By Yoo Jee-ho and Kwon Hoon

SEOUL, Sept. 7 (Yonhap) -- Park Sung-hyun has dominated the Korea LPGA Tour so thoroughly this year that with each victory, the 23-year-old proves a U.S. LPGA membership is no longer essential for success -- financial or otherwise.

Park captured the Hanwha Finance Classic for her seventh win of the season last week and earned 300 million won (US$273,900). It took her earnings this season to 1.26 billion won, and the figure puts Park on par with the South Korean leaders on the LPGA Tour and the Japanese LPGA Tour.

Through last week, Kim Sei-young was the top South Korean on the LPGA money list with $1.2 million, or about 1.3 billion won, just ahead of Park. Kim is fourth overall on the U.S. money list.

Only Lydia Ko, a four-time winner, and Ariya Jutanugarn, who's won five tournaments, enjoy comfortable leads over Park in their 2016 earnings.

South Korean golfers have taken over the JLPGA Tour in recent years, but even their leading money winners aren't that much better off than Park.

Lee Bo-mi, poised for her second straight money title in Japan this year, has made about 134 million yen this year, or 1.43 billion won. Shin Ji-yai, former world No. 1 and currently third on the JLPGA money list, has made 83.8 million yen, or 892 million won.

Kim Ha-neul, former KLPGA star, is fourth in Japanese earnings this year, on the strength of 12 top 10s in 18 tournaments. She has earned 83.6 million yen (891 million won).

About a decade ago, the likes of Shin and Seo Hee-kyung, former LPGA Rookie of the Year, took the popularity of the Korean tour to new heights. The KLPGA pie has gotten bigger for everyone, and even Ko Jin-young, No. 2 on the 2016 KLPGA money list with a little over 800 million won, would find herself among the top 15 on the U.S. tour.

Eleven players have made more than 300 million won, including Kim Ji-hyun, who's earned 308 million won without a victory. She'd still be inside the top 50 on the LPGA money list and get herself into invitational tournaments too.

The Korean tour has been a talent feeder for the LPGA, producing such stars as Ryu So-yeon and Kim Sei-young, the U.S. tour's top rookies in 2012 and 2015, respectively. There were times when the KLPGA functioned like the minor league in baseball, where golfers who'd scaled the peak here would turn their eyes toward the United States.

Park, on the other hand, has bucked the trend by staying put and actually making a meteoric rise up the world rankings.

She started the year at 27th in the world but has gone all the way up to No. 12, sixth best among all South Koreans. She's ahead of LPGA winners, including Ryu and Lee Mi-rim. 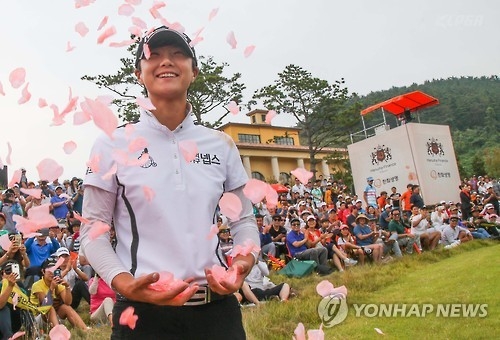 And here's the gist of what Park has demonstrated: If you're good enough to win consistently in Korea, then you can enjoy homecooking, avoid all the grind of playing in America and still make a ton of money. High world rankings will also get you into LPGA majors.

Park is part of the new generation of golfers who would rather avoid the grueling LPGA qualifying tournament, or Q-School, when they know they're good enough to win an LPGA event and earn exemptions for the following season.

Park has often said while the U.S. tour is in her future, she has zero intention of entering the Q-School.

Even if Park does win an LPGA tournament this year and becomes eligible for full-time membership next year, she may do well to learn from the cautionary tale of Baek Kyu-jung, former KLPGA player who made the quick jump to the U.S. circuit.

Baek won an LPGA event held in South Korea in October 2014 and chose to go play full-time in America the following season at the tender age of 19. Unable to adjust to the long travels and grinding schedules, Baek posted just one top 10 and missed six cuts in 27 events last year.

She has fared worse this year, with seven missed cuts and no top 10s in 15 starts.

Kang Choon-ja, deputy commissioner of the KLPGA, said the domestic tour still has room to grow.

"We've been feeding the U.S. and Japanese tours with excellent players, but we'll try to become the tour where players from around the world will want to come and play," Kang said. "We'll also try to raise world ranking points and create an environment where the players can concentrate just on their actions on the field."