SEOUL, Sept. 7 (Yonhap) -- Kangin, a member of the K-pop boy band Super Junior, was ordered to pay a fine of 7 million won (US$6,400) by a local court on Wednesday on charges of causing a traffic accident while under the influence of alcohol.

The Seoul Central District Court convicted the 31-year-old of fleeing the scene after crashing into a street lamp in southern Seoul in May.

"If (a driver) causes an accident, it is normal to get out of the car and check the situation, but Kangin left the scene," the court said. "Considering that he has a record for a similar crime, a harsh punishment is needed."

The court, however, said it also took into consideration that no one was hurt and the only damage caused by the mishap was to the lamp.

Earlier in July, prosecutors summarily indicted Kangin, but the court decided to open a trial, saying there is a need to carefully review the case. A summary indictment does not require a formal trial.

During the previous hearing, the singer pleaded for leniency, saying he deeply regrets his actions.

The K-pop singer had only recently started appearing on TV shows after avoiding the spotlight for years as a sign of expressing self-restraint in the wake of his previous drunk driving incident in 2009.

Following the second accident in May, his agency S.M. Entertainment released a statement saying he would be suspended from all activities as a singer and entertainer. 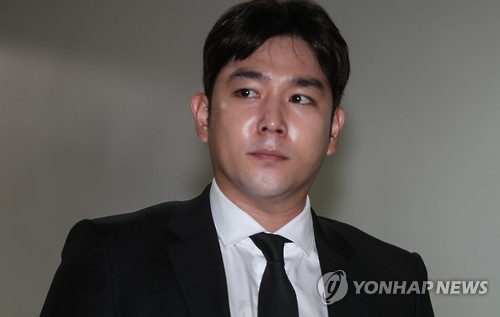