SEOUL, Sept. 7 (Yonhap) -- Top South Korean automaker Hyundai Motor Co. unveiled its third-generation i30 hatchback Wednesday, one day before what it called the latest and most advanced hatchback was to go on sale globally.

The new i30 shares most of its looks and design with its previous versions, except for the new cascading grille that will be installed in all of Hyundai's upcoming vehicle models, according to the company. 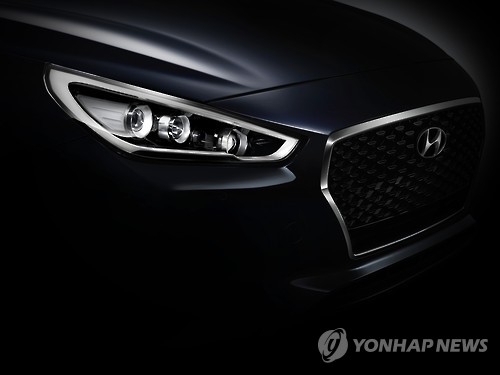 However, the next-generation i30 is an entirely different car in terms of performance, safety and convenience, it said.

The new Hyundai i30, marketed as the Hyundai Elantra in some markets, including the United States, has 53.5 percent of its body made of advanced high strength steel, compared with 27 percent in its previous versions, making it lighter but stronger.

Advanced high strength steel is 10 percent lighter than conventional steel products but is twice as strong.

"The new i30 comes with the highest basic features in the company's history, including a high performance-high efficiency powertrain, that offer a secure, comfortable ride and the best car handling experience," Kwak Jin, a vice president of Hyundai, told reporters at a press event held earlier in the day. 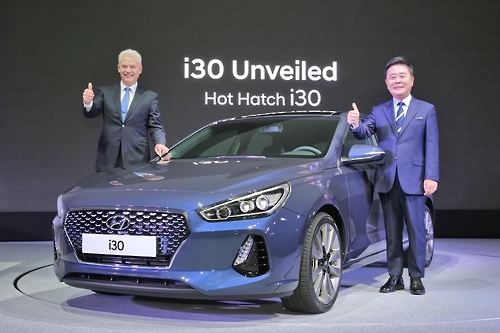 The vehicle also comes with a wide range of the latest safety technologies, such as the vehicle stability system that helps keep the vehicle stable when driving or braking on wet, slippery roads, also making it one of the safest cars Hyundai has to offer.

The car's seven advanced air bags also offer protection for the driver's knees in case of a crash, while the emergency stop signal that warns following cars the car is braking hard helps prevent rear-end collisions.

In terms of performance, the all new i30 hatchback comes in three choices -- two with a gasoline engine and one with diesel -- that easily outperform their predecessors with bigger engines.

The gasoline model comes with a 1.4 liter or 1.6 liter turbo engine. The 1.6 turbo GDI engine can produce maximum horsepower of 204 and a 27 kg-meter torque, compared with a maximum 172 horsepower and 21 kg-meter torque produced by a 2-liter GDI engine in previous models, according to the company.

The 1.6-liter gasoline model carries a mileage of 11.6 kpl while the one with a 1.6-liter diesel engine has a fuel efficiency of 17.3 kpl.

"The i30 is a vehicle model specifically designed for the global market that has sold over 1.83 million cars since its first launch in 2007, and helped the company expand its presence in Europe and other overseas markets," a company official said.

"The new i30, which is truly a newly invented vehicle through innovations in performance, design, safety and price competitiveness, will open a new era of hatchbacks not only in the global market but also in the local market," the official added.