The census carried out every five years showed the country's population grew an average of 0.5 percent annually from 2010 through 2015, Statistical Korea said. In 2010, the population came to 49.71 million.

The annual gain has been steady at 0.5 percent on average since 1995, the agency said.

Out of the total, the number of South Korean nationals reached 49.7 million, while foreign residents who have stayed in the country for at least three months totaled 1.36 million, accounting for 2.7 percent.

Asia's fourth-largest economy became an aging society in 2000, when more than 7 percent of the population was over 65 years old, and is expected to become an aged society with the percentage reaching 14 percent soon. A country with a senior population taking up 20 percent is classified as a super-aged society.

The agency said the surge is attributable to the country's fast aging population coupled with a low birthrate.

The median age of the entire population hit 41.2 years, up from 38.2 five years earlier, topping the 40-year line for the first time.

The latest census, in addition, showed the country's population density stood at 509 people living within a 1-square-kilometer radius, up from 497 tallied five years ago, which was the third highest in the world after Bangladesh and Taiwan.

Also, 49.5 percent, or 25.27 million, of South Korea's population was living in the capital city area that covers Seoul, Incheon and Gyeoggi Province, while Busan, the country's second-largest city on the southeastern coast, was home to 6.8 percent of the population.

There were a total of 19.56 million households in the country last year, with an average of 2.53 members. One-member households were the main family type in 2015, accounting for 27.2 percent, while the typical four-member families took up 18.8 percent.

The statistics agency said it carried out the 2015 census based on the national resident registration records, with the traditional person-to-person survey conducted simultaneously. 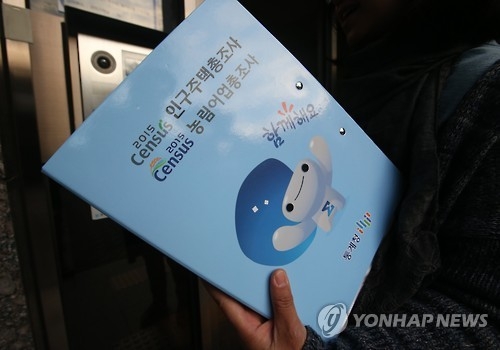