SEOUL, Sept. 7 (Yonhap) -- Vitamins and other health products have overtaken Korean beef as the most popular gifts for next week's Chuseok holiday, data showed Wednesday, a sign that illustrates changes in South Korea ahead of the enforcement of an anti-corruption law later this month.

Health products accounted for 36.5 percent of gift set sales at Lotte Department Store from Aug. 26 to Sept. 5, according to data compiled by the major South Korean department store.

Health products were followed by processed foods and daily necessities with 20.1 percent. Sales of Korean beef, known as hanwoo, came in a distant third with 9.8 percent.

The department store said hanwoo gift sets had been the most popular among South Koreans for the past five years.

Sales of hanwoo gift sets accounted for 25.7 percent of total sets sold at Lotte Department Store ahead of the Lunar New Year's holiday earlier this year. Most hanwoo gift sets are priced at more than 100,000 won (US$91).

Still, sets that consist of processed foods and daily necessities which are priced under 50,000 won have become popular among local consumers ahead of Chuseok, the Korean equivalent of Thanksgiving Day, which falls on Sept. 15.

"Health products have emerged as the most popular gifts by overtaking hanwoo due to the effect of the anti-corruption law and the heightened public interest in health," said Nam Ki-dae, an official at Lotte Department Store.

The development represents growing changes toward gifts in South Korea ahead of the implementation of the law. It imposes tight limits on free meals and gifts that can be accepted by government officials, journalists and private school teachers to try to curb the deep-rooted tradition of excessive hospitality.

The maximum value of gifts a person subject to the law can receive has been set at 50,000 won, and cash gifts for events such as weddings and funerals have been fixed at no more than 100,000 won. 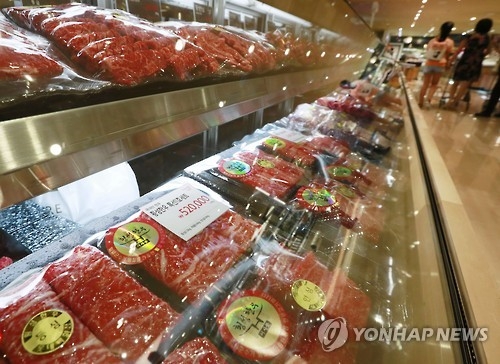