He did not provide the names of countries being targeted, citing the sensitivity of defense-related deals but expressed optimism that headway can be made.

He spoke to Yonhap on the sidelines of the ongoing Defense Expo Korea (DX Korea) 2016, an annual defense forum held at the KINTEX exhibition hall in Goyang, Gyeonggi Province. 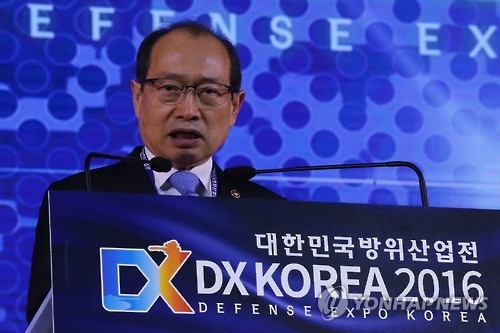 "In the defense industry markets, China is making an aggressive push to gain a bigger share and Japan is also making greater effort to strengthen its presence. The Chinese government is even giving full-scale financial support to its defense industry firms so they can better sell their products globally," Chang pointed out.

"At this critical juncture, South Korea should double its efforts to gain a foothold in the high value-added market."

When President Park Geun-hye makes an overseas trip to potential buyer countries, South Korean companies need to make the best use of the presidential visit to promote their weapons systems and sign initial deals with local firms for future contracts, the minister said.

South Korea has to provide high-quality weapons at competitive prices to overseas clients, Chang said. He said the country should export operations-related and maintenance services for shipped armaments, which can further boost its competitiveness.

He went on to say all the deals should be based on "mutual trust" between South Korea, and its existing and potential weapons buyers.

South Korea's defense exports soared to US$3.54 billion in 2015 compared with $250 million in 2006, according to the state defense acquisition agency.