It said the general is expected to examine the manufacturing process of the FA-50 supersonic jet, which is an advanced light attack variant of the TA-50, during his visit to the Korea Aerospace Industries (KAI) factory in Sacheon, 437 kilometers southeast of Seoul, on Thursday.

The factory is home to South Korea's sole aircraft maker KAI and can churn out planes for both the South Korean Air Force and foreign customers.

The FA-50 like the TA-50 and the T-50 Golden Eagle trainer was co-developed by KAI and U.S. defense firm Lockheed Martin.

The TA-50 is a lead-in fighter trainer that can be armed with the AIM-9 Sidewinder and AGM-65 Maverick air-to-ground tactical missiles.

South Korea operates the KT-1 basic trainer, the jet-powered T-50 advanced trainer and the TA-50 to train its pilots.

Besides inspecting KAI, Roberson will also visit the South Korean Air Force's 16th tactical fighter wing in Yecheon, North Gyeongsang Province, and will fly the TA-50 operated by the air unit there for an hour.

Roberson's South Korea visit drew attention as he came ahead of the U.S. Air Force's T-X program, which could lead to an order for some 1,000 jet trainers worth about US$20 billion.

The winner of the T-X bid, which will be decided in 2017, is expected to dominate the global trainer jet market, estimated at around US$18 billion over the coming decades.

Related to the jet, KAI's export strategy has been two-pronged, with one centered on selling planes like the T-50 jet and its advanced variants, while at the same time exporting key items like wing ribs and bodies to major civilian airplane manufacturers.

KAI's other competitor for the T-X bid is a Boeing-Saab consortium, which is expected to offer its own aircraft -- a variant of the JAS-39 -- in the latter half of this year.

The South Korean Air Force, meanwhile, said Roberson is responsible for the recruiting, training and education of Air Force personnel. 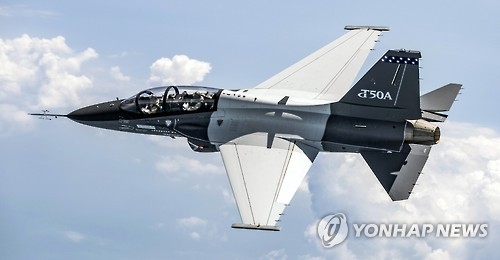