SEOUL, Sept. 7 (Yonhap) -- State prosecutors on Wednesday visited Lotte Group founder Shin Kyuk-ho to check his health condition and decide how to question him over allegations he evaded some hundreds of billions of won in taxes in the process of handing over stocks to family members.

The Seoul Central District Prosecutors' Office said its officials met with the 93-year-old business tycoon and his doctor at his office in Hotel Lotte in Seoul.

Based on Wednesday's meeting, the prosecution will decide when and how to interrogate Shin over allegations he dodged some 600 billion won (US$550 million) in taxes in the process of donating a combined 6.2-percent stake in Lotte Holdings, held in borrowed names, to his third wife, her daughter and his eldest daughter Shin Young-ja in 2006. Lotte Holdings is Lotte's de facto holding firm based in Tokyo.

Prosecutors had originally summoned Shin to undergo questioning Wednesday, but he declined, citing health issues. Shin asked the prosecutors to visit him and carry out the interrogation. 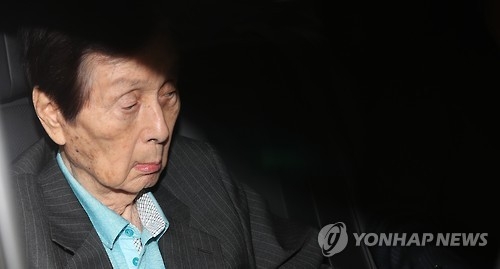 Prosecutors visit Lotte founder to check his health before interrogation

Prosecutors visit Lotte founder to check his health before interrogation