SEOUL, Sept. 7 (Yonhap) -- How long did the image of Alan Kurdi, a 3-year-old Syrian refugee boy, lying lifeless on the seashore, linger in your head? Or the more recent photo of a child who was pulled out of the rubble in Syria, covered in dust and blood, sitting inside an ambulance, looking dazed and frightened.

Media is churning out a constant stream of disturbing images day after day, and yes, people are shocked and troubled. But what then? 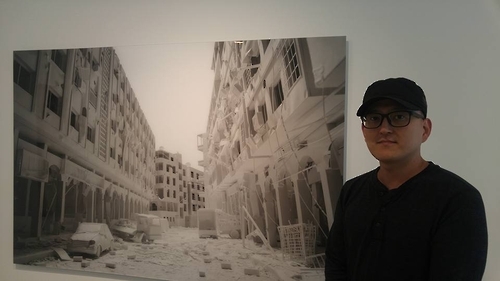 Artist Ha Tae-bum recreates gruesome scenes of war, natural disasters and social conflict that he finds online in miniature out of white paper and then photographs it. The white, eerie images, even though neither distraught people nor atrocious acts are shown in them, are enough to send chills down your spine.

"By presenting the image in total white, I wanted to point out how distant and aloof people react to terrifying incidents happening around the world, most recently in Syria," the artist said in a meeting with reporters on Wednesday, a day before the opening of his 13th solo exhibition "White" at Leeahn Gallery in Seoul.

"I looked up information about Syria and was quite surprised to learn that the country has such a rich history, tradition and culture. But now, something went seriously wrong and it is near collapse," he said. "It was a chilling realization that a country can go down just like that and it can happen to us." 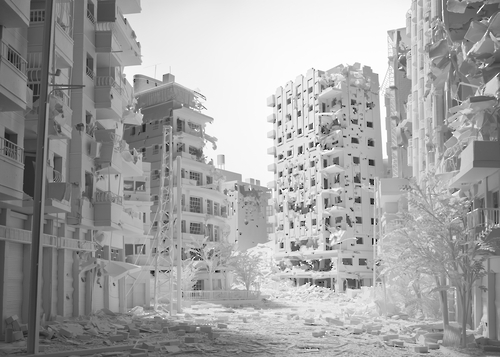 He studied sculpture in Chungang University in Seoul and went on to Stuttgart State Academy of Art & Design in Germany. He began to develop his own political view while he lived there, he said.

"I met many friends there who had a totally different world view from mine and naturally I became more interested in politics," he said. The bombing of a civilian radar station in Georgia by Russian jets in 2008 was his first attempt to re-enact a real incident through art.

When he builds a miniature, he gets down to a very small detail like the interior. He shoots BB guns into the completed paper structure to describe the buildings riddled by bullet holes as realistically as possible. He said he pays attention to the inner structure because it can be naturally exposed through the holes. 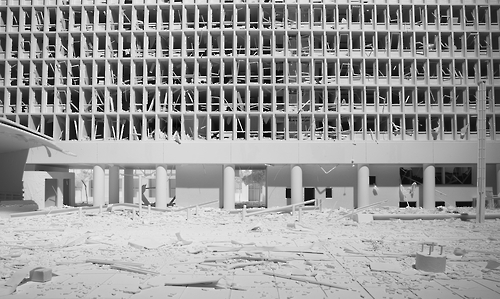 Last year, he got more recognition in the country's art scene when he was chosen one of the finalists of the annual Korea Artist Prize given by the National Museum of Modern and Contemporary Art (MMCA).

"Through his art, we can have a moment to reflect on our emotionless bystander's attitude towards a tragedy and how media plays a role in getting people desensitized to violence," Choi Jin-hee, the exhibition director said.

The exhibition, which runs until Oct. 22, features 22 works including a video, drawings and printed images. Among them, 10 items, mostly related to Syria, are never-seen-before.

"I am not trying to criticize media. What I am doing is to consider the attitude on how we consume news," Ha said. 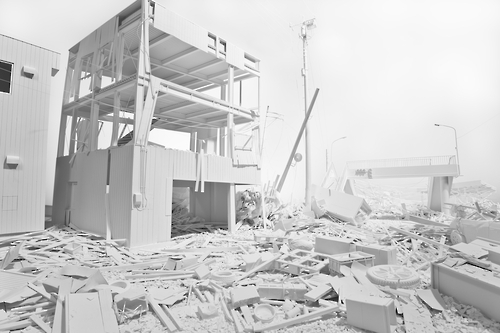