The statement, signed by the leaders of the 18 EAS member countries, follows Pyongyang's continued provocations, including the launch of three mid-range ballistic missiles on Monday and a test of a submarine-launched ballistic missile last month.

It is the first time the forum has issued such a statement on non-proliferation. The EAS, held in the Laotian capital of Vientiane, consists of South Korea, the United States, China, Japan, Russia, India, Australia, New Zealand and the 10-member Association of Southeast Asian Nations,

The statement also expressed "grave concern" for the North's nuclear tests and ballistic missile launches and called for the full implementation of all relevant U.N. Security Council resolutions that ban such tests.

In the statement, the leaders also called for the continuation of joint efforts to resume "meaningful" six-party talks, the multilateral aid-for-denuclearization dialogue that has been stalled since December 2008.

President Park Geun-hye welcomed the statement, saying the adoption is significant as it displayed the EAS member states' will to sternly deal with continuing nuclear threats posed by the North.

During her remarks at the summit, Park called the North's unceasing provocations "existential threats" to the South, urging the international community to focus on tackling the evolving military threats.

"Merely within four to five minutes, North Korea's nuclear weapons and missiles can reach all parts of the Republic of Korea, including Seoul," she said. "For us (South Korea), they are existential threats." 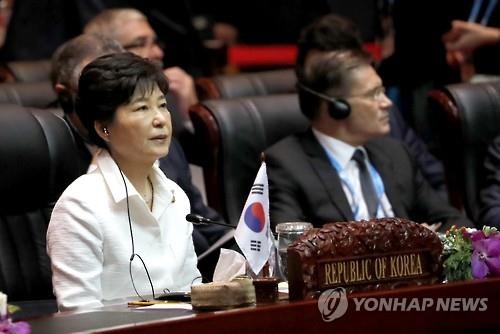 Park also warned that if the international community fails to recognize the "urgency and seriousness" of the nuclear and missile threats and shatter Pyongyang's desire to continue them, it would regret it.

Although she did not directly mention Seoul and Washington’s plan to deploy a U.S. anti-missile system to the Korean Peninsula, the president said the country took an "inevitable, minimal and self-defense" measure to defend against threats posed by the North.

The allies plan to deploy a Terminal High Altitude Area Defense system by the end of next year, but face strong opposition from China and Russia, which argue the deployment would undermine their strategic security interests.

The president also underscored the provocative nature of the Kim Jong-un regime, saying his military has fired a total of 22 missiles since its fourth nuclear test in January -- far more than the regime of his predecessor and late father Kim Jong-il during his 18-year rule.

Portraying the South China Sea dispute as another serious challenge to the region's peace and stability, Park expressed her hope that territorial issues involving the strategically crucial waterway will be resolved through" peaceful, creative" diplomatic efforts.

Seoul has been cautious not to step into the increasingly sensitive territorial dispute. But calls have been growing for Seoul to play a role in protecting lanes of communication on the high seas as its export-reliant economy is heavily dependent on maritime trade routes.

On Friday, Park is set to hold a summit with her Laotian counterpart Bounnhang Vorachith. The leaders plan to discuss trade, investment, development and other areas of mutual concern, Park's office Cheong Wa Dae said.

Following the summit, Park will attend a business forum involving business leaders from South Korea and Laos before returning to Seoul.