VIENTIANE, Sept. 7 (Yonhap) -- President Park Geun-hye on Wednesday stepped up her diplomacy to court the Association of Southeast Asian Nations (ASEAN), which has been emerging as a crucial partner for South Korea due to its geopolitical value, growth potential, not to mention the two sides' complementary economies.

During the 18th South Korea-ASEAN summit in the Laotian capital of Vientiane, Park renewed her pledge to support the 10-member group's integration efforts and deepen cooperation in trade, education, cultural exchanges, rural development and health care among other things.

The resource-rich bloc's regional influence has been growing, particularly since late last year when it launched "ASEAN Community," an integrated group consisting of economic, socio-cultural and politico-security pillars.

The inception of the community that came in line with the bloc's consistent push for "One Vision, One Identity and One Community" marked a major milestone in the integration of Southeast Asian states and the East Asian region as a whole, analysts said.

"As global political and economic instability continues to increase, the AEC (ASEAN Economic Community) is expected to play an even greater role as a growth engine driving the East Asian economy and a leader in regional cooperation in East Asia," Park said in an interview with Laos's English daily, Vientiane Times.

"Korea is making efforts to further advance relations with ASEAN by taking advantage of the momentum generated by the start of the AEC."

The ASEAN Community now has around 630 million people -- the world's third largest population after China and India -- with its gross domestic product (GDP) reaching around US$2.4 trillion, nearly double that of South Korea.

It, moreover, boasts strategic locations linking the Indo-Pacific region that hosts the world's most crucial trading and energy supply routes -- a reason why the United States, China and other major countries have been vying for influence over ASEAN.

Statistics involving the relationship between South Korea and ASEAN further highlight the pressing need for Seoul to further cement ties with the fast-emerging bloc.

"If you look at all these figures, we cannot emphasize too much the importance of ASEAN as a partner for trade, investment, people-to-people exchanges, not to mention the significance of its rich resources," said Lee Sun-jin, professor at Sogang Institute of Southeast Asian Studies.

South Korea is not the only country bent on cementing ties with the regional bloc that consists of Brunei, Cambodia, Indonesia, Malaysia, Myanmar, the Philippines, Singapore, Laos, Thailand and Vietnam.

The U.S. is seeking to court the bloc with the so-called rebalancing policy, under which it has shifted its policy attention to the Asia-Pacific region, toward which global power and wealth have gravitated.

For Washington, some of the Southeast Asian states have been "swing players" as they have been playing a balancing act between the U.S. and China without taking the side of either in order to maximize their own national interests, experts said.

China, for its part, seeks to strengthen ties with ASEAN with its grand national strategy, called "One Belt One Road." The initiative, seen as a long-term project to expand China's sphere of influence, seeks to connect China with Southeast Asia, Central Asia, the Middle East, Europe and even Africa through "land and maritime silk roads."

India has also been pushing for its "Act East" foreign policy drive to deepen its partnership with ASEAN. The Act East initiative is a follow-up to New Delhi's "Look East" policy, which was formulated in the early 1990s to deepen its economic engagement with East Asia and countervail against the growing influence of China and other powers in Asia.

Amid the intensifying great-power rivalry over ASEAN, South Korea has been constantly pushing to strengthen its foothold in the region through various cooperative programs, including those to establish infrastructure; strengthen health care and vocational education.

South Korea's relationship with ASEAN first began when the two sides established a "sectoral" dialogue partnership in 1989, which was elevated to a new level after the two sides signed a bilateral free trade deal in 2009 and forged a strategic partnership the following year. 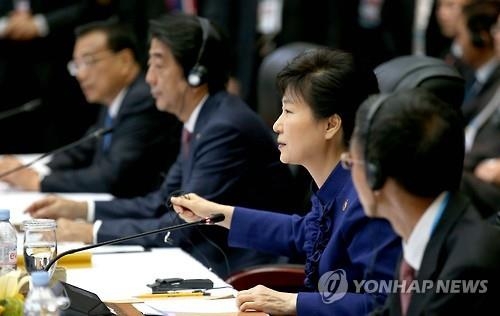 Experts say that compared with other regional powers, South Korea is better positioned to firm up cooperation with ASEAN due to its "cultural and historical similarities."

"Although China, Japan and other regional powers have been seeking to woo ASEAN, the bloc has some sort of suspicions over their intentions and feels the need to play a balancing act among the major powers," said Yoon Jin-pyo, international politics professor at Sungshin Women's University.

"But ASEAN does not have such suspicions or concerns when it comes to cooperation with South Korea, which shared similar historical experiences and some sort of cultural and social affinities, which may open more opportunities for South Korea to cooperate with ASEAN," he added.

However, South Korea needs to recalibrate its approach toward ASEAN, which has hitherto been focused mostly on the economic dimension, Yoon noted.

"Going beyond the so-called sales diplomacy, South Korea can seek to promote co-prosperity with the regional bloc by supporting it in areas where it needs outside support such as healthcare and education," he said.

Analysts also pointed out that South Korea's diplomacy, which has been centered on Northeast Asia, should give more weight to other regions such as Southeast Asia.

"South Korea's diplomacy still appears lopsided with a central emphasis on China, Japan and Northeast Asia as a whole," Lee from the Sogang Institute of Southeast Asian Studies said. "Korea should shift its focus to Southeast Asia and the Indo-Pacific axis that are rising as the center of global power."