WASHINGTON, Sept. 7 (Yonhap) -- The U.S. special envoy on North Korea will visit South Korea and Japan for meetings with his counterparts and other officials amid heightened tensions in the wake of Pyongyang's latest missile launches, the State Department announced Wednesday.

Amb. Sung Kim's trip, set for Sept. 10-13, comes after North Korea test-fired three medium-range ballistic missiles on Monday in the latest in a series of missile firings in defiance of the international community.

Kim, who has been nominated to be ambassador to the Philippines, will first be in Tokyo on Sept. 10-12 for meetings with Director General for Asian and Oceanian Affairs Kenji Kanasugi and other senior Japanese government officials, the department said in a statement.

The envoy will then visit Seoul on Sept. 12-13 for meetings with Special Representative for Korean Peninsula Peace and Security Affairs Kim Hong-kyun and other senior South Korean government officials, the department said. 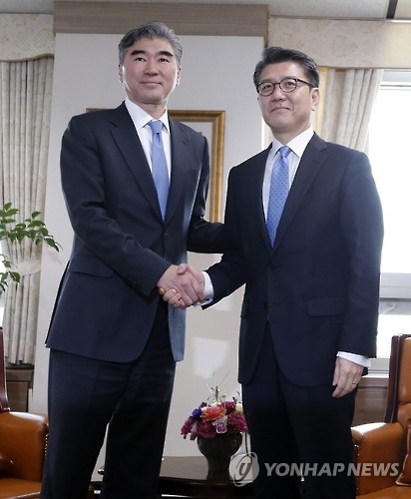 The announcement of Kim's trip came a day after North Korea's deputy nuclear negotiator, Choe Son-hee, arrived in Beijing on Tuesday. That raised the possibility of Kim meeting with Choe while in the region, but the State Department said Kim has no plans to do so.

"There are no plans at this time for Ambassador Kim to meet with Choe Son-hee," a department official said.

On Monday, the North fired three Rodong medium-range missiles off its east coast. The missiles flew about 1,000 km and landed in waters some 400 km inside Japan's air defense identification zone, according to South Korea's military.

Such launches represent a violation of U.N. Security Council resolutions that ban the North from any activity using ballistic missile technology over concern that it can be used to develop long-range missiles capable of carrying nuclear weapons.