INCHEON, Sept. 8 (Yonhap) -- After taking just one of their first two matches in the Asian World Cup qualification, South Korea must win out at home to have a chance to play in the big tournament, their coach said Thursday.

Uli Stielike returned home from Malaysia, where South Korea only managed a scoreless draw with Syria, a heavy underdog ranked outside the top 100. South Korea had earlier beat China 3-2 at home, and now have four points to sit in third place in Group A of the final Asian qualifying round for the 2018 FIFA World Cup.

Uzbekistan are leading the way with six points. Iran also have four points but have a better goal difference than South Korea. Teams each have eight matches remaining.

Speaking to reporters at Incheon International Airport, Stielike said a country needs at least 22 points to qualify for the World Cup.

There are six teams in each of the two groups in the current round, and only the top two nations from each earn automatic World Cup berths.

"We picked up a point (against Syria), but it's as if we actually lost two points," Stielike said of the team's mediocre performance. "Looking at 22 points as the minimum required to qualify, we'll have to collect 18 more points. And it's become extremely important to win all four matches remaining at home."

South Korea will next host Qatar on Oct. 6 and will face Iran in Tehran five days later. Stielike said he's not looking past the Qatar match.

"During the final qualifying round for the Brazil World Cup, we struggled to beat Qatar 2-1 at home," Steilike said. "We have to play a better match."

South Korea built a 3-0 lead over China before letting the opponents get back two goals. And they couldn't solve Syria despite dominating the ball possession, and even allowed dangerous counterattack chances on the other end.

"It's important not to repeat the same mistakes," the coach said. "We need to have more poise and precision near the goal. We'll make necessary adjustments to reach the point total that we need."

The South Koreans visibly tired in the second half against Syria, and Stielike defended them, saying his Europe-based starters might not have been in top form because their club seasons had just started.

"Besides, we made so many technical mistakes that we made life difficult on ourselves," Stielike added. 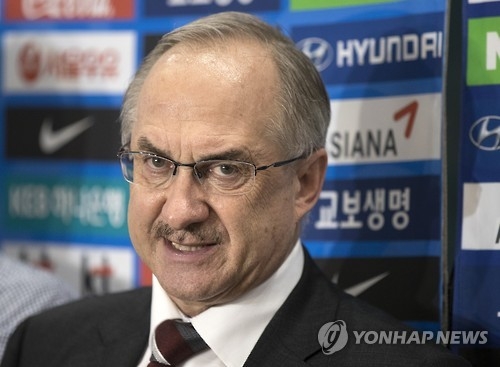 S. Korea coach says team must win out at home to qualify for World Cup

S. Korea coach says team must win out at home to qualify for World Cup