The Special Act on the Corporate Revitalization, dubbed the "one-shot act," came into effect in early August to help businesses carry out an intra-corporate merger and spin-off through simplified procedures including exemptions from the strict antitrust laws and financial market regulations. They will also be given tax benefits and subsidies for research and development on corporate restructuring.

Under the new law, the companies that want to benefit from the fast-track procedures are required to win government approval.

Hanwha Chemical, a chemical arm of Hanwha Group, is seeking to sell its chlorine and caustic soda plant to Unid, a local chemicals manufacturer, as part of its business reorganizing efforts to deal with industry-wide oversupply of such materials and upgrade its business portfolio.

At the same time, Unid will transform the facility into a sodium hydroxide-manufacturing factory in a bid to cut output of caustic soda and focus more on higher value-added sodium hydroxide, according to the ministry.

The two companies have plans to invest a combined 1 trillion won (US$915.6 million) into the business reshuffle project.

Tongyang Moolsan, a farming machine producing company, will invest some 25 billion won into restructuring and rearrangement through taking over a machinery firm.

The ministry said it will keep close tabs on the developments of business reorganization by the selected firms and encourage other businesses to enjoy the benefits of the "one-shot" act.

The South Korean government has put high policy priority on corporate restructuring, while its key industries like shipbuilding and steelmaking sectors have been suffering from massive losses stemming from plunging overseas demand.

The one-shot act was designed to encourage businesses to pre-emptively carry out corporate restructuring on their own initiative. 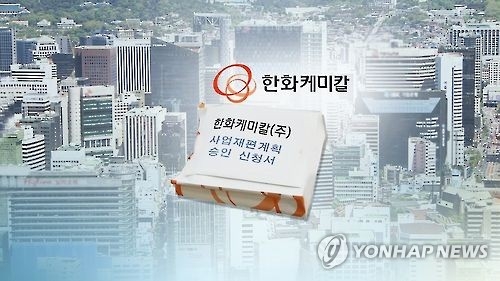