Observers at the Defense Expo Korea (DX Korea) 2016 said that there is no doubt that greater support will permit the country's defense industry to achieve technological prowess that can transform the arms sector into a new growth driver for Asia's fourth-biggest economy. The exhibit runs through Saturday at the KINTEX exhibition hall in Goyang, just northwest of Seoul.

"Overseas demand for South Korea's weapons systems are on the rise due to improving quality and competitive prices. But South Korea's defense firms still have to go the extra mile in the technologies field to catch up with their more established rivals," Sung Sang-hyun, director with Hanwha Techwin Co.'s strategy support division, told Yonhap News Agency. 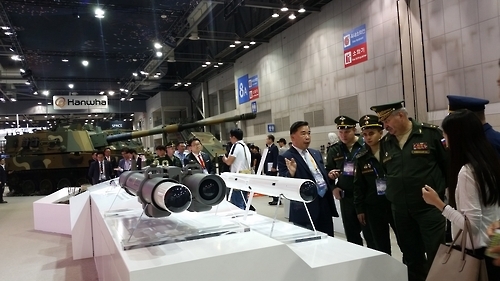 He pointed out that South Korea has increased its imports of foreign armaments out of "urgent demand" for cutting-edge and systematically stable weapons systems due mainly to ever-growing nuclear and missile threats from North Korea, the director said.

"If Korean firms come up with unrivaled technologies and stability in their weapons systems, Seoul will find no reason to import foreign-made armaments to protect the lives of its people and assets from an attack," he said.

In that vein, defense experts here pointed out two things that must be improved as soon as possible -- the current bidding system for a state defense project and the general lack of motivation for developers of weapons systems.

At present, the government selects a company which offers the lowest bidding price. A bigger focus should be put on bidding firms' technology levels and R&D investments. Moreover, more incentives should be given to developers. At the very least, they should be allowed to share the rights to technologies they developed with the government, they said.

The government provides financial support to local defense firms when they develop technologies and it has the rights to control major defense-related technologies. 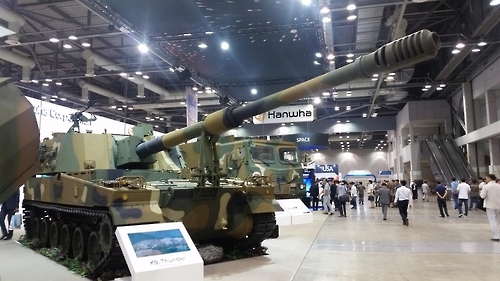 "Advanced technologies will not only guarantee a captive share in the domestic market for South Korean players but also help them strengthen their presence in the global markets long dominated by a small number of big-name players such as Lockheed Martin Corp. of the United States and Israel's Rafael Advanced Defense Systems Ltd.," Kim Yong-kyun, an analyst at Korea Association of Defense Industry Studies, said.

In Korea, Hanwha Techwin and three other defense affiliates of the explosives-to-financial conglomerate Hanwha Group -- Hanwha Defense Systems, Hanwha Systems and Hanwha Corp. -- are leading the efforts to secure a competitive edge in military technology, with growing attention being paid to military software technology.

Based on their know-how, the four companies have developed the K-9 self-propelled howitzer, the K-21 armored vehicle, the radar systems for the Korean Fighter Experimental (KF-X) program and the "Chunmoo" multiple rocket and artillery assets (MLRS).

While expanding their exports, the four companies plan to inject more cash to improve their weapons systems. They earned a combined 3.8 trillion won (US$3.47 billion) last year, grabbing about a 35 percent share of the 11 trillion won domestic defense market.

The government also plans to spend more on next year's defense budget. Seoul is asking for 40.3 trillion won for 2017, up 4 percent from 38.8 trillion won set for this year. 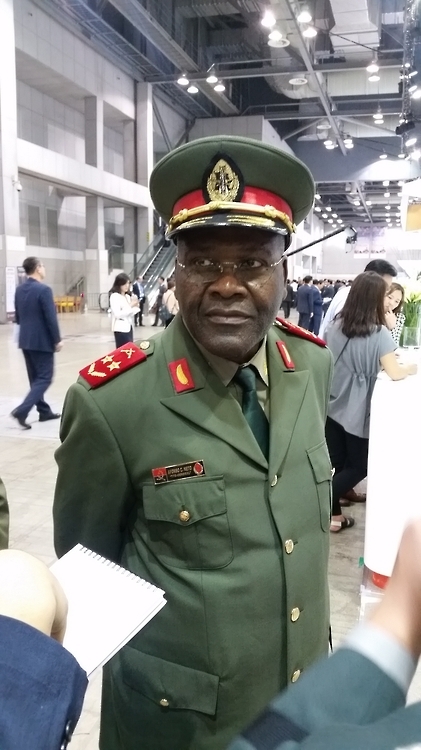 Meanwhile, many participating military officials and businessmen at the annual defense exposition showed an interest in locally built weapons systems.

Gen. Afonso Carlos Neto from the Angolan Army praised South Korea's defense technology levels, saying the country has made a stellar performance leap in the short history of its defense industry.

"We are here to look around defense armaments displayed by South Korean companies. Our country currently does not have any military contract with South Korea. But we will consider military deals if we find appealing armaments," the general said.

Other military officers who inspected various weapons and sensors on display expressed interest in South Korean products saying their armies can consider using certain systems that meet their operational requirements.

While many were interested in shopping, many were eager to sell their products in the Korean market. They include a Norwegian drone company and an Israeli scanning and surveillance systems company. 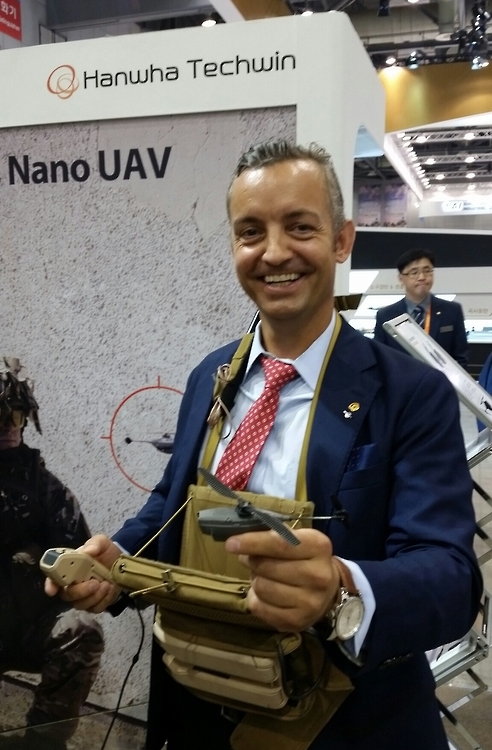 Ketil Vanebo, sales and marketing manager of Norway's Proxy Dynamics AS, said Proxy Dynamics has recently signed a memorandum of understanding with Hanwha Techwin to sell its helicopter-shaped drone product -- specialized in intelligence, reconnaissance and surveillance -- for military use in South Korea.

CONTROP Precision Technologies Ltd., which is 50 percent owned by Rafael Advanced Defense Systems Ltd., set up its own section inside Rafael's booth at KINTEX. Rafael is one of Israel's three biggest defense industry companies together with Elbit Systems and Israel Aircraft Industries (IAI). 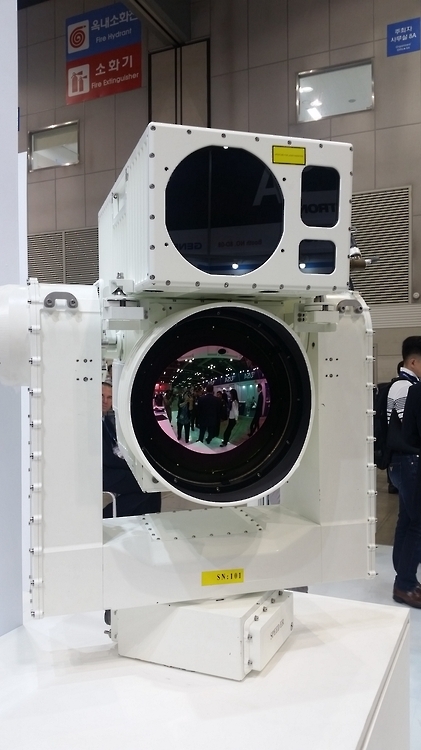 Some 400 defense industry companies, including 80 multinational firms, are on hand to hold talks with potential buyers in the biennial exhibition, the defense ministry said.

Companies from such countries as the United States, Germany and Israel have set up independent booths to showcase their weaponry. Domestically, companies such as LIG Nex1, Poongsan Corp. and Hyundai-Rotem Co. aim to attract buyers with their latest cutting edge armaments, it said.

The Association of the Republic of Korea Army hosted the first biennial event in 2014 with support from the defense ministry, the Army and the state defense procurement agency.