LOS ANGELES, Sept. 7 (Yonhap) -- A South Korean film about the 1950-53 Korean War will be screened in U.S. military bases around the world, the film's North American distributor said Wednesday.

The Army and Air Force Exchange Service (AAFES), the retailer on U.S. Army and Air Force installations worldwide, has recently decided to open "Operation Chromite" in 71 cinemas under its control on Sept. 16, CJ Entertainment America said.

The number breaks into 33 in the United States and 38 out of the country in Britain, Germany, the Netherlands and Japan.

Last month, the movie had a special preview at 11 army bases in the U.S. and received favorable reviews about a week before its official North American release on Aug. 12.

The historical action film, currently being shown at 13 cities in the region, has so far earned US$1 million, ranking 19th at the local box office on its fourth week of run.

In South Korea, the movie has attracted an audience of more than 7 million since July 27.

Starring Lee Jung-jae, Lee Bum-soo and Hollywood star Liam Neeson, the movie tells the story of real-life South Korean soldiers who carried out a covert operation to prepare for the daring amphibious Incheon landing operation led by U.S. Gen. Douglas MacArthur. The landing at the port of Incheon turned the tide of the war in favor of the U.N. forces during the war. 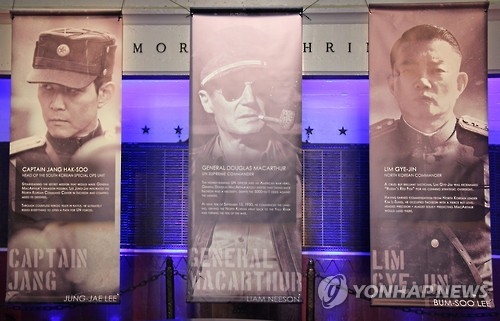 'Operation Chromite' to open in U.S. military bases around the world

'Operation Chromite' to open in U.S. military bases around the world