SEOUL, Sept. 8 (Yonhap) -- Galleria Duty Free 63, a duty-free store run by Hanwha Galleria, said Thursday it has picked three part-timers who will get paid US$20,000 for one week of marketing and brand-advertising activities.

Galleria Duty Free 63 put out the ad for the high-paid part-timers after fully opening its outlet in the gold-tinted 63 Building skyscraper in Yeouido in July following a partial opening in December. 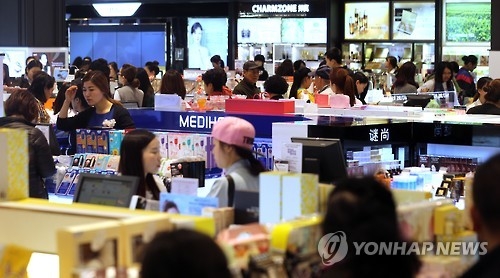 One Korean and two Chinese promoters were selected through an online vote based on their self-instruction video posted on the event's website.

From Oct. 3-9, the three will shop at Galleria Duty Free 63, visit an aquarium and dine at a restaurant in 63 Building. They will also watch the Seoul International Fireworks Festival slated for Oct. 8 and sail on a yacht in the Han River and post their activities on their social networking sites, Hanwha Galleria said.

Among them is Eom Sae-ah, a 26-year-old Korea fasion model and actress who also works as a tourism content creator.

Zhou Ruoxue is a 26-year-old Chinese female power blogger who modeled for a Chinese cosmetics brand, and Xiong Aobo is a 21-year-old Chinese tourism creator specializing in Korean trips and has appeared on several Korean entertainment programs.