SEOUL, Sept. 8 (Yonhap) -- South Korea, the United States and Japan are in talks to hold a trilateral meeting of their top diplomats on the sidelines of a United Nations plenary session scheduled for later this month in New York, government sources said Thursday.

Details of the three-way meeting are being discussed between the nations, the insiders said.

How to put more pressure on a defiant North Korea may dominate the possible trilateral meeting as it comes amid Pyongyang's unrelenting military provocations. Defying international warnings and U.N. resolutions, North Korea launched three ballistic missiles on Monday, which all landed in waters near Japan.

On the backdrop of North Korea's unusually frequent military provocations, South Korea and the U.S.' presidents vowed to increase efforts to push for the international community's thorough implementation of U.N. Security Council Resolution 2270 during their summit Tuesday in Vientiane, Laos.

The resolution is the U.N. council's toughest-ever sanctions imposed on Pyongyang following the reclusive regime's fourth nuclear test in January and a long-range rocket launch the following month.

Additional state-level sanctions are also likely to be discussed when the three top diplomats meet in New York.

The three-way talks would also serve as the latest diplomatic gesture to nudge China to work more closely with others to pressure North Korea to give up its military provocations.

Separately, Foreign Minister Yun will deliver a keynote speech to the U.N. plenary session on Sept. 23. The minister's speech will focus on shedding light on the hazard posed by North Korea's nuclear and missile development, and rallying international support behind the implementation of the resolution.

The next day, North Korean Foreign Minister Ri Yong-ho is scheduled to deliver his keynote speech at the U.N. 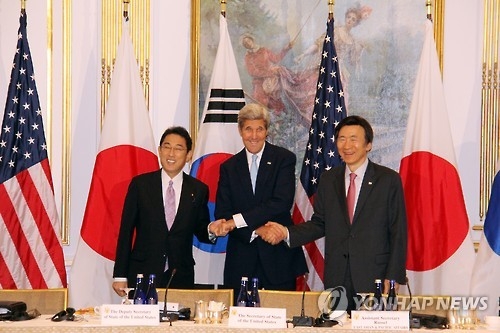