VIENTIANE, Sept. 8 (Yonhap) -- President Park Geun-hye on Thursday renewed her call for tighter international cooperation against North Korea's nuclear threats, stressing that the communist state continues to threaten peace and stability on the Korean Peninsula and beyond.

In her video message to the Seoul Defense Dialogue (SDD), Park also said that the unification of the peninsula is an "ultimate" solution to the resolution of the decades-old nuclear standoff with the recalcitrant regime.

"Our government, in close cooperation with the international community, will induce North Korea to renounce its nuclear program and put our efforts into laying the groundwork for the unification of the peninsula," she said.

"A unified Korea -- where there would be freedom and human rights, and no fears about nuclear arms and wars -- will greatly contribute to the prosperity and happiness of mankind," she added.

The commander-in-chief, in addition, pointed out that the world faces "complex security crises" that are caused by terrorism and cyber incursions, in addition to conventional threats such as those from Pyongyang's nuclear arms and missiles.

"Effectively responding to various challenges that threaten the safety of human race, regardless of time and place, is a prerequisite for world peace and prosperity," she said.

The SDD, an annual security forum hosted by Seoul's Ministry of National Defense, kicked off its three-day run on Wednesday. The forum with the main theme, "Complex Security Crises: Challenges and Solutions," brought together hundreds of government officials and experts from 34 countries, including South Korea, and five international organizations. 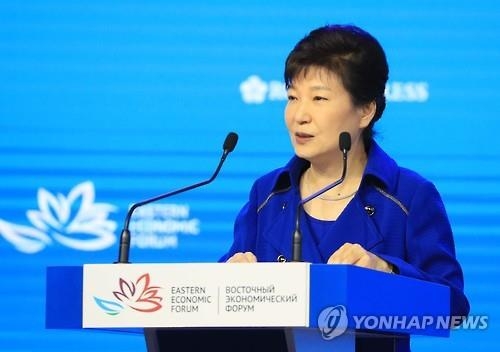