Martinek, a Czech, won the 2010 ALIH championship with Anyang as a forward, and then served as the team's assistant coach when they won the next two titles. He went back to his native Czech Republic to coach there, before getting a homecoming of sorts with the South Korean club.

The 2016-2017 season actually got under way on Aug. 27, but some teams have yet to see action. Anyang have opened their title defense with six straight victories, scoring 35 goals and giving up just eight.

The season will kick into new gear this weekend, with Anyang Halla hosting Sakhalin in the rematch of last season's final, and two South Korean clubs, Daemyung and High 1, facing each other. 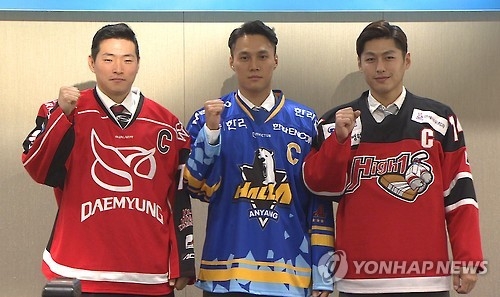 Anyang captain Kim Won-jung said with most members of last year's championship team returning, his club are still the favorites.

"I know a lot of teams will want to beat us, and we have to work extra hard," the forward said. "If we can entertain the crowd, I think the results will naturally follow."

Going the other way are the Daemyung Killer Whales, who have lost their first six games. They've scored eight but given up 42 goals, while facing Anyang and Sakhalin.

Daemyung captain Kim Bum-jin said the tough start of the season has been a good learning experience for the young club.

"I think we're just having some growing pains," he said. "We'll learn how to overcome adversity. Hopefully, we can turn things around quickly."

High 1 will open their season against Daemyung on the road. Their first-year coach Bae Young-ho, who'd been on the Daemyung bench the last two seasons, said he's looking forward to "a fresh start" with the new club.