SEOUL, Sept. 8 (Yonhap) -- Card spending by Chinese travelers to South Korea has risen more than five times over the past five years, with more than half of the money being spent shopping, data showed Thursday.

Chinese nationals spent 4.32 trillion won (US$3.95 billion) with their credit cards during their stays here in the first half of 2016, up from 785.8 billion won four years ago, according to the data compiled by Shinhan Card's big data center and Korea Culture & Tourism Institute.

The growth far surpasses the 2.4 times hike in average card spending by foreigners during the same period.

Over half of their card expenditures went to shopping, while 978.4 billion won and 422.7 billion won were spent on accommodations and food, respectively, the data showed.

By region, Seoul dominated with 72.1 percent of credit card transactions taking place in the city. The southern resort island of Jeju and Gyeonggi Province took up 8.1 percent and 5.1 percent of the transactions, respectively.

"An increasing number of young Chinese fond of Korean pop culture have flocked to South Korea over the past few years, leading the latest consumption trend," said Lee Jong-seok, the big data center director at Shinhan Card. "Young generations' showing a preference for Korea is expected to last for a while." 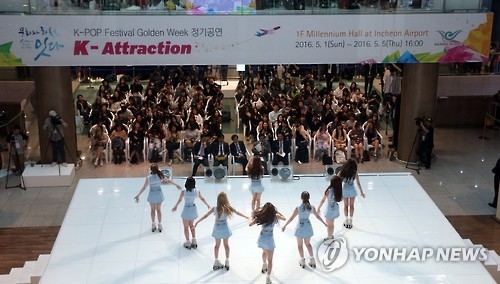 Among all foreign visitors, the ratio of card transactions by Chinese also jumped from 28 percent in 2012 to 62 percent this year, the center said.

The Japanese were the second-biggest source of foreign spending with 977 billion won of card transactions in the first six months of the year, followed by Americans with 599.1 billion won, it noted.

Chinese' card spending in S. Korea more than quintuples from 2012

Chinese' card spending in S. Korea more than quintuples from 2012