SEOUL, Sept. 8 (Yonhap) -- Unlike most participants on a field trip to Korea that she was joining with her family last week, Anna Zinsmeister isn't a big K-pop fan or obsessed with Korean dramas.

She started learning Korean out of pure curiosity and "willingness to communicate better with Koreans," she said in an interview with Yonhap News Agency last week.

From Burbank, California, Zinsmeister has been voluntarily hosting Korean students the last few years as part of a student exchange program that her city runs with South Korea's Incheon city.

The two cities have maintained amicable sisterhood relations since 1961, when the U.S. city responded to a request by an Incheon city official to donate some English books to students in the then war-torn, impoverished Korean city. As recently as in November last year, Burbank sent an art sculpture titled "Dancing Stones" to Incheon.

The spirit of long-lasting friendship has trickled down to a grassroots level. Under the exchange program between the two, her daughter visited the port city in 2008 and her son went there in 2011. In return, she has hosted four Korean students from Incheon so far, with whom she still keeps close contact. Better communicating with her host students is one of the big motivations behind her Korean lessons, she said. 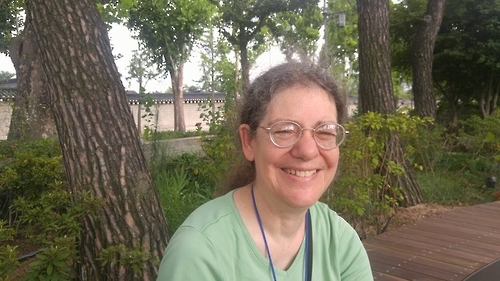 Last year, her husband suggested they join the annual field trip organized by the sate-run Korean language King Sejong Institute in Los Angeles where she has been learning Korean for more than two years, and she agreed. And this year, it got turned into the whole family's first overseas trip as their two children joined them.

"When I tell people that I am coming to Korea and they ask 'Why?' I keep thinking 'Why not?'" she said. "It has been a really nice experience coming here and learning about Korea."

The field trip this year included a tour to the southern port city of Busan, the two children's favorite place, and the historic city of Gongju where the family could engage in various cultural activities like making Korean traditional rice candies.

A professional weaver and spinner for 43 years, Zinsmeister has been making clothes and teaching weaving in a community center and at her house. Once a week, she attends a Korean class for 2 1/2 hours. To improve her Korean, she practices with her friend via Skype, watches Korean dramas and uses a language learning program available on a public library's website. As if that is not enough, she writes down Korean words on stuff that she often uses in her daily life. On her medication box, she puts the days of the week in Korean.

Learning a second language at an advanced stage in life, however, is really challenging, she admitted.

"It is hard because it depends a lot on students doing the work. If you don't do the work, you don't get much out of it. It is self-motivated."

On the other hand, being a beginner in whatever it is feels great, she said.

"Sometimes it is nice not to know something. When you do something for a long time, and you can do it so easily, you tend to forget the struggles that a beginner has."

Now that she knows how frustrated a beginner can feel, "I am more patient and more aware of keeping my language simpler" when she speaks with students in her weaving class for whom English is their second language.

(Yonhap Interview) After experiencing Korea abroad, American weaver gets to see it in person

(Yonhap Interview) After experiencing Korea abroad, American weaver gets to see it in person