SEOUL, Sept. 8 (Yonhap) -- A group of lawmakers, both from the ruling and opposition parties, kicked off a gathering Thursday to exchange ideas on a possible revision of South Korea's Constitution, stressing the 30-year-old law needs to be changed to reflect the latest political developments.

"The Constitution established in 1987 fails to reflect changes made over the past 30 years," said the lawmakers' group, comprising the ruling Saenuri Party, as well as the Minjoo Party of Korea (MPK) and the People's Party. They added that the existing system gives the president excessive power.

The group is composed of 185 lawmakers of which 65 are from Saenuri and 84 from the MPK.

Under South Korean law, two-thirds of the 300-seat National Assembly must give a nod to revise the Constitution. The group said it will make efforts to expand the number of participating lawmakers. 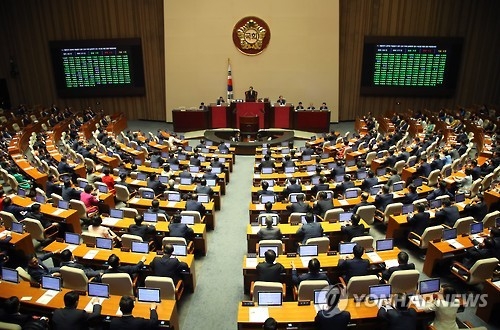