JEONJU, South Korea, Sept. 9 (Yonhap) -- A group of young women chatting and laughing merrily are huddled up in the center of a street lined with Korean traditional houses, or hanok, with unique roof edges that are raised slightly toward the blue, sunny sky.

They are all dressed in Korean traditional clothes, hanbok, which are far more glamorous than ordinary attire, with some carrying bejeweled fans or wearing big bamboo hats.

A few meters away from them, also wearing florid hanbok, a couple who seem to be just married walk down the road filled with handmade craft shops and cafes, on their way to a small tea house that sells traditional drinks and eats. 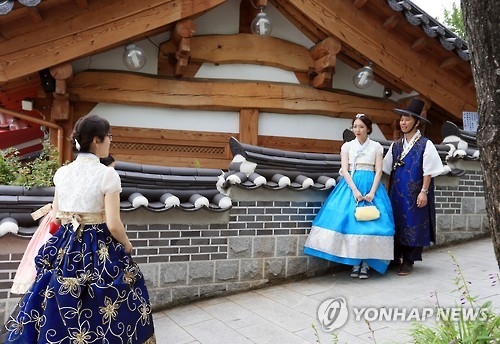 These people may make you feel as though you were standing in the middle of a street in 18th century Joseon Dynasty, or watching a real-time drama or movie that portrays a busy commercial district in the pre-modern period.

But, when you look carefully, you can find something awkward and odd.

Each of the girls is wearing trendy, up-to-date makeup and high heels, with mobile phones or digital cameras and selfie sticks in their hands. Some are sucking on lollipops and others are eating ice cream cones.

The street shops are selling handmade accessories and ornaments like earrings, necklaces, key holders and magnets, while the cafes have spicy rice cake stews, grilled beef and chicken skewers on their menus, with a credit card reader on the side.

"Let's take a picture of us. Come, come, squeeze in!" one girl shouts, raising her selfie stick high in the air. Her friends gather around her and say "Kimchi!" 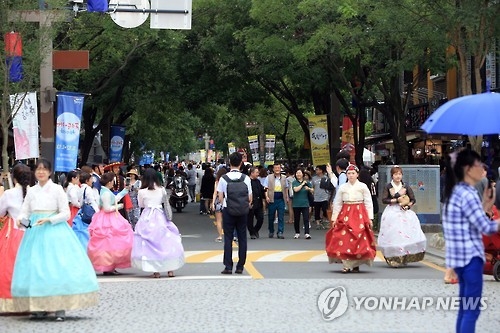 This is not a new or strange scene at Jeonju Hanok Village, about 200 km south of Seoul, which entertains original Korean traditions within the industrialized modern city.

In recent years, the village has emerged as one of the most attractive tourist destinations among South Korean and foreign travelers thanks to its uniqueness. Nearly 10 million people visited the site last year.

Located in a fertile field, Jeonju is a historical city where an ancient kingdom had its capital and where the royal family of the Joseon Dynasty originated.

Under the 1910-1945 Japanese colonial rule, Japanese merchants flocked to the city to engage in rice transactions and settled inside the fortress. In response, Koreans clustered at the opposite of the Japanese complex, forming their own hanok village. 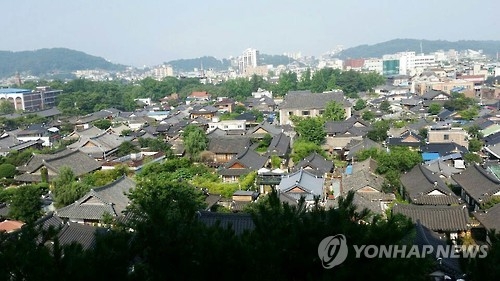 The Jeonju municipal government designated the region as a tradition conservation area to prevent over-development and help the current inhabitants keep dwelling in their houses.

Alongside the time-honored boulevard, there are a number of shops that lend traditional costumes and uniforms which are frequented by young tourists, who are ready to start a historical journey in modern times. Some bold people borrow royal robes or ancient military uniforms.

After changing, they look around the souvenir shops filled with folk art like tea pots and small lamps made of Korean traditional paper, and Korean restaurants.

They crossed to the other side of the street, where young shop owners display their handmade crafts that appeal to young customers.

"It's the most unique place I've seen in Korea where past and present blend harmoniously," said Lee Eun-hee, a 39-year old lawyer, who visited the folk village with her friend to sightsee. 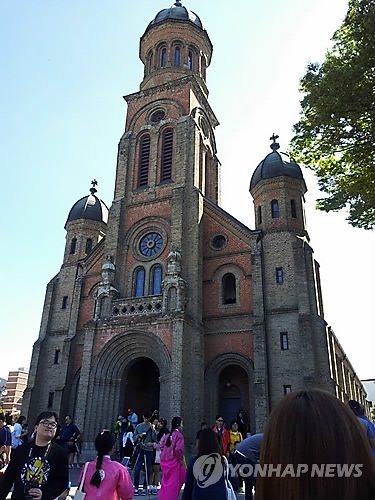 "Do you see these girls and boys dressed in hanbok? They breathe life into the hanok town as if we are watching a moving picture. I love this place," Lee continued.

In the western part of the hamlet, the Jeondong Catholic Cathedral faces Gyeonggijeon Shrine across the main street.

The cathedral, the oldest Western-style building in North Jeolla Province, looks alien in the village filled with tradition and folklore, although it is considered one of the most beautiful churches in South Korea.

Built in 1914 by French priests to commemorate the execution of the first Korean martyrs there, the chapel has Romanesque architecture with red bricks, bell towers and stained glass windows.

On the opposite side, a Confucian-style royal palace resides, located there for 600 years since 1410.

Gyeonggijeon is a royal palace built to safely house the portrait of the founder of Joseon Dynasty. It is surrounded by long stone walls as if to separate the noble, quiet place from the mundane, noisy lives of the humble. 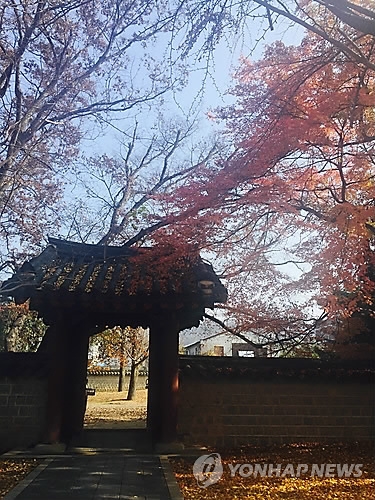 But visitors and tourists do not care about such a clear contrast between the medieval and modern period, or between Confucianism and Catholicism. They just enjoy taking pictures at the cathedral and the royal shrine, as their hanbok fit well no matter where they stand.

For them, such a timeless mismatch makes Jeonju Hanok Village richer in content and excitement, transcending time and space.

"When I first heard of a hanok village, I thought of place replete with obsolete things, souvenirs that nobody would buy," said Lee. "But Jeonju Village is beyond my imagination. It gives us a well-harmonized sense of refined tradition and youth."