And he lived up to his reputation at the inaugural World Martial Arts Masterships in Cheongju, some 130km south of Seoul, taking the men's changquan title. Lee scored 9.68 points in the final Wednesday, edging past compatriot Kim Dong-hyun by 0.03 point.

For Lee, triumphing at the relatively less-popular masterships may not be a happier moment than winning gold medals at major tournaments like the Asian Games, but still he was satisfied he was able to compete.

"I wanted to show my best performance to home fans who were visiting this first edition of the martial arts competition," Lee told Yonhap News Agency on Thursday. "I'm just happy that I won this competition."

The 22-year-old arrived in South Korea from Taiwan just a night before his event. With fellow wushu practitioners Seo Hee-ju and Cho Seung-jae, he competed at the Asian Wushu Championships.

Although he could just have rested and skipped the masterships, Lee said he didn't want to miss an opportunity to perform in front of home fans.

"First of all, I wasn't really that tired," he said. "I know some top practitioners didn't participate in this event, but that doesn't matter. I don't care about my rivals, but only about my performance when I'm on the stage."

Wushu remains relatively unpopular here in South Korea. Lee said he hopes the masterships will spark more popularity for martial arts in the country. The first edition of the World Martial Arts Masterships ended its seven-day run on Thursday with some 1,900 athletes and officials from 81 countries competing in 17 disciplines including kickboxing, taekwondo and judo.

"I hope people get to know more about martial arts, including wushu, through the masterships," he said. "As a martial arts practitioner, I personally welcome the idea of having this kind of competition. I want to see the masterships growing bigger."

Lee, who already gained media spotlight when he was nine as a wushu prodigy, said he will now rest and prepare for upcoming major events, including the world championships and the Jakarta Asian Games in 2018. Lee promised to take part in the second edition of the mastership in North Chungcheong Province in 2019.

"I see no problem competing at the masterships," he said. "I just hope that martial arts become popular in South Korea." 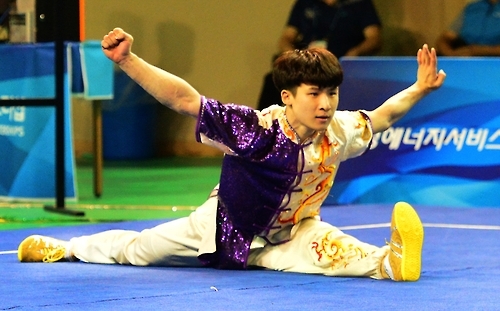