SEOUL, Sept. 8 (Yonhap) -- The Terminal High Altitude Area Defense (THAAD) system to be deployed in South Korea by the end of 2017 will not be aimed at China and Russia, a U.S. military official said in a defense forum held in Seoul Thursday.

"Our missile defense cooperation, most recently in the form of deploying a THAAD battery to the Korean Peninsula, is a purely defensive move to deter and defend against growing threats from North Korea," David Shear, principal deputy under secretary of defense for policy at the U.S. Department of Defense, said in a session of the Seoul Defense Dialogue 2016 under way in the capital city. 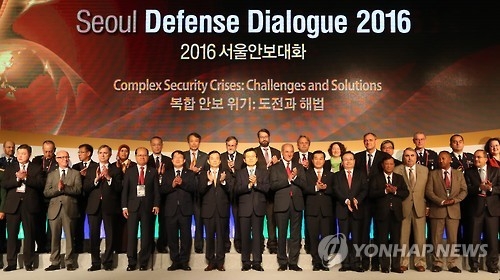 In July, Seoul and Washington announced a decision to deploy the THAAD missile defense system in South Korea to better defend against the North's evolving nuclear and missile threats. China and Russia have expressed strong opposition, saying the system can be used against them.

In its latest provocations, it tested three medium-range Rodong missiles to demonstrate its military capability on the occasion of the G-20 summit of advanced and emerging economies and days before 68th anniversary of the government's founding.

Calling the recent missile launches as "unprecedented serious provocations" towards Seoul, Tokyo and other allies in the region, the U.S. official said "North Korea's relations with the South and the rest of the world will deteriorate further and it will be further isolated."

In the past decades, the U.S. has tried to denuclearize the North using tools such as deterrence, pressure and diplomacy. But it appears to have not worked properly.

"If we don't put a stop to this rampage now, in the not-too-distant future, we will be forced to live with a neighbor with nuclear weapons that is more than willing to actually use them," Kim said during the same session.

He urged related parties to focus all their energy into resolving this issue with "utmost urgency and firm resolve."