During a summit in the Laotian capital of Vientiane, President Park Geun-hye and her Indian counterpart Narendra Modi agreed on the need to advance improvements talks on the Comprehensive Economic Partnership Agreement (CEPA) -- a type of FTA that emphasizes two-way economic cooperation on top of market opening.

India and South Korea’s CEPA took effect in January 2010. But in June, the countries began official talks to improve the trade agreement.

"The two leaders shared an understanding of the need to further promote market opening and free trade at a time when instability in the world economy grows due to low growth, volatility in the financial market and the emergence of trade protectionism," Cheong Wa Dae said in a press release.

During the summit, Park, in particular, asked Modi to help South Korean firms who complained about Indian import regulations in the steel and chemical sectors. Modi, in response, showed his willingness to address the issue.

The South Korean leader also took note of the fact that the bilateral relationship has entered a "new phase" since the two sides elevated relations to a "special strategic partnership" when Modi visited Seoul in May last year.

Modi said that the elevation has been a "great asset" for both, and encouraged Park to join efforts to contribute to the peace and prosperity for Asia.

The president used the summit to ask India to actively support international efforts to address the North Korean nuclear standoff. Modi, in turn, pledged to continue to cooperate with Seoul in tackling the issue.

Park and Modi are in Vientiane to attend back-to-back summits, including those involving the 10-member Association of Southeast Asian Nations. 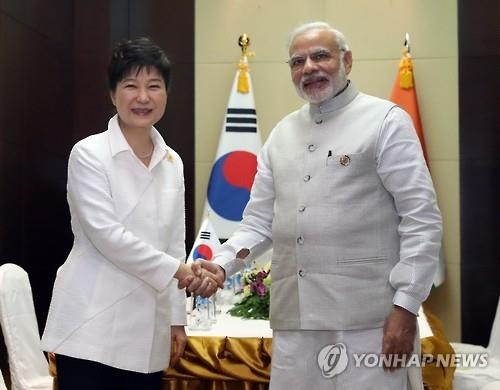 Turnbull expressed his support for Seoul's policy toward the communist state, saying it would strongly respond to any acts that threaten the peace and security of South Korea and neighboring countries.

Park also took note of Australia's active efforts to have the East Asia Summit adopt an unprecedented statement on non-proliferation that urged Pyongyang to abandon its nuclear and ballistic missile programs. 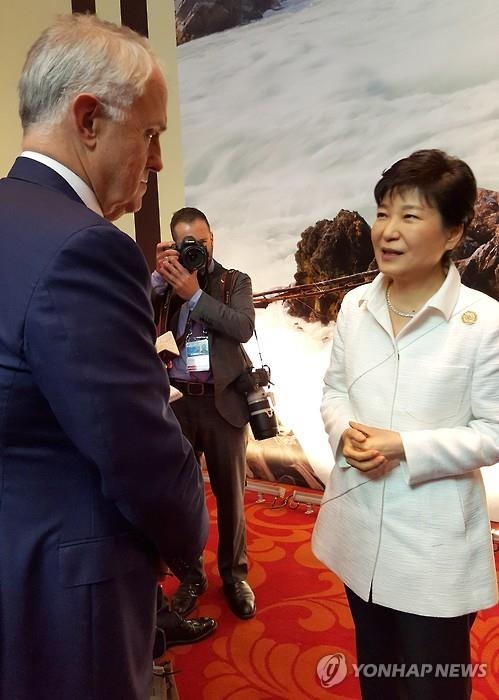