Producers of the series received the Grand Prize at the 11th Seoul International Drama Awards during the ceremony at the KBS Hall in Seoul's Yeouido.

"The Night Manager" is based on the 1993 novel of the same name by John le Carre about a former British soldier who is recruited by an intelligence operative to navigate Whitehall and Washington, D.C. where there is an alliance between the intelligence community and the secret arms trade.

The six-part series was aired on Britain's BBC One channel in February and on AMC in April in the United States.

The KBS military romance "Descendants of the Sun" won three prizes in the Korean "hallyu" drama category. It received Best Drama while its lead actor Song Joong-ki was named Best Actor. K-pop singer Gummy, who sings the drama's O.S.T track "You Are My Everything," captured the best theme song award.

"Hallyu" refers to the global boom of Korean pop culture.

The 16-episode series depicts the romance between Army captain Yoo (Song), who serves in the U.N. peacekeeping forces, and a doctor named Kang Mo-yeon (Song Hye-kyo), in a fictional war-torn country called Uruk.

The series premiered on the same day in South Korea and China, and has generated billions of views on the Chinese video website iQiyi.

Co-hosted by the Seoul International Drama Awards and the Korean Broadcasters' Association, the event has been held annually since 2006.

This year, 28 dramas along with 28 producers, actors and actresses were nominated for awards out of 265 entries from 51 countries. 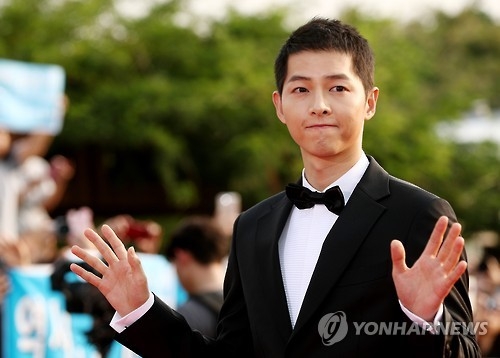