During a meeting with South Korean residents in the Laotian capital of Vientiane, Park also expressed her appreciation for their contribution to the development of the relations between Laos and South Korea -- the Southeast Asian state's fourth largest trading partner.

"South Korean companies have already made inroads in various sectors in Laos," she said. "I hope that more firms can contribute to deepening bilateral economic relations and offer a fresh fillip into your community here." 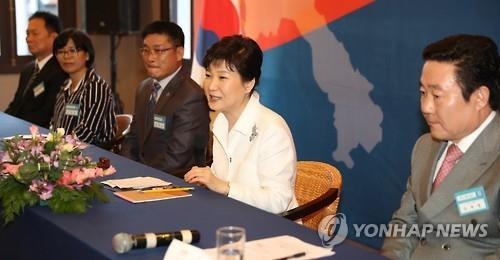 Noting that there are many challenges facing South Korea, the president called for unity and urged everyone to tackle challenges together. She was apparently referring to security challenges from North Korea.

On Friday, Park is set to hold a summit with her Laotian counterpart Bounnhang Vorachith. The leaders plan to discuss trade, investment, development and other areas of mutual interest, Park's office Cheong Wa Dae said.