Trump made the remark during a campaign speech in Philadelphia, once again reaffirming one of the key points of his foreign policy: that allies take U.S. defense support for granted and don't pay their fair shares.

"I will be respectfully asking countries such as Germany, Japan, South Korea, Saudi Arabia to pay more for the tremendous security we provide them," Trump said.

Trump also said that only five NATO countries, including the U.S., are meeting their minimum requirement to spend 2 percent of their gross domestic product on defense.

The real-estate tycoon has expressed deeply negative views of alliances and U.S. security commitments overseas, seeing them as a cumbersome burden sucking up taxpayer dollars, and arguing that the U.S. should no longer be the "policeman of the world."

He has said allies should pay 100 percent of the cost of stationing American troops, or the U.S. should be prepared to end their protection. He even suggested allowing South Korea and Japan to develop their own nuclear weapons for self-defense so as to reduce U.S. security burdens. 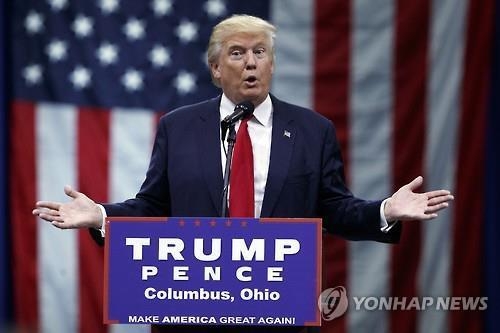