During their summit in the Laotian capital of Vientiane, Park stressed that Pyongyang's nuclear and missile provocations "seriously" threaten the peace and stability of Northeast Asia and the entire world.

Seoul believes Vientiane, which is currently the rotating chair of the 10-member Association of Southeast Asian Nations, can play a role in ensuring that the international community will take strong measures in response to Pyongyang's apparent fifth nuclear test.

The summit was held hours after a magnitude 5 earthquake was detected near the North's nuclear site in its northeastern region, strongly suggesting that the reclusive country carried out another nuclear test.

During the summit, the two leaders also agreed to strengthen "strategic communication" through high-level personnel exchanges and deepen bilateral cooperation in the political and defense sectors, Cheong Wa Dae said.

On the development front, Park expressed Seoul's will to support Laos' ongoing socioeconomic development projects. She, moreover, pledged to carry out a set of development projects for Laos, including the "Better for Girls" program, aimed at enhancing education and health care for young women in the Southeast Asian state.

The two sides then exchanged views on joint efforts to support Laos' rural development goals. She particularly explored ways to apply the benefits of South Korea's so-called Saemaul Movement undertaken in the 1970s.

Seoul's movement was a government-led initiative that promoted ideas of diligence, self-help, and cooperation to generate growth and enhance living conditions for people in rural areas.

Following the summit, the leaders signed a series of memorandums of understanding over bilateral cooperation.

South Korea's diplomatic ties were severed after Laos became communized in 1975, but the two nations restored formal relations in 1995. North Korea has maintained diplomatic relations with Laos since 1974. 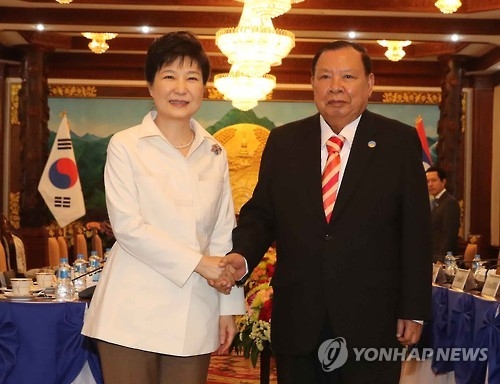