The monetary policy board of the Bank of Korea (BOK) voted unanimously to keep the key rate at 1.25 percent, as central bank officials have recently cited concerns about snowballing household debts and a possible rate hike in the United States. 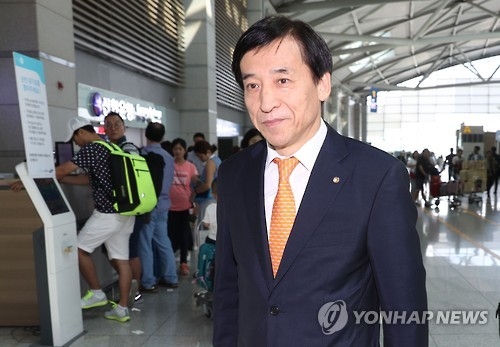 "South Korea's interest rates should be higher than those of the key currency country as it needs to take into account the danger of capital outflows as a small open economy," Lee said, referring to U.S. interest rates.

The won gained 6.75 percent against the dollar this year as of Friday.

Some analysts said they expect the BOK to leave its policy rate unchanged at 1.25 percent by the end of this year.

"It would be difficult for the BOK to lower the key rate at a time when the U.S. is likely to raise its rates in two months," said Lee Mi-seon, an analyst at Hana Financial Investment.

Last month, Federal Reserve Chair Janet Yellen said the case for an increase in the federal funds rate has strengthened in recent months, citing continued solid performance of the labor market and outlook for economic activity and inflation. Still, she did not provide any specific time frame for the possible rate hike.

Also Friday, the BOK vowed to take measures to stabilize markets in case of increased volatility following North Korea's nuclear test, though it did not elaborate on what it meant by stabilization measures.

The bank said it will strengthen monitoring of domestic and foreign financial markets, though the negative influence the North's fifth nuclear test has on South Korea's financial and foreign exchange markets could be limited.

The decision came in an emergency meeting at the central bank following the North's latest provocation on its founding anniversary Friday.

Lee later left for Switzerland to attend a meeting of central bankers at the Bank for International Settlements.