The meeting comes as a magnitude 5 earthquake was detected at North Korea's nuclear site in the country's northeastern region. Pyongyang later confirmed it has conducted its latest nuclear test.

"The nuclear test conducted by the North is a violent action against the international goal for denuclearization," Hwang said during the meeting, highlighting President Park Geun-hye also made efforts in her summits with leaders from the United States, China, Japan and Russia to get Pyongyang to denuclearize.

Hwang presided the meeting as Park is currently staying in Laos.

"North Korea will only get stronger international sanctions as well as diplomatic isolation from nuclear provocations," Hwnag also said.

The prime minister also pointed out that Pyongyang should no longer allocate limited resources on missile developments when its people are living in poverty.

"The South Korean government will mull additional sanctions against the North under the Seoul-Washington alliance, as well as with the U.N. Security Council," Hwang said, adding it will also expand diplomatic efforts to induce all countries to join the action against Pyongyang.

"Ministries should make efforts to prevent negative impact on the public's everyday lives as well as the economy," Hwang said.

The prime minister added each ministry should promptly share necessary information and help the public keep abreast of developments and focus on their livelihood.

Hwang then ordered all public employees to stay alert and be ready to handle emergency developments, especially as Park is currently abroad. 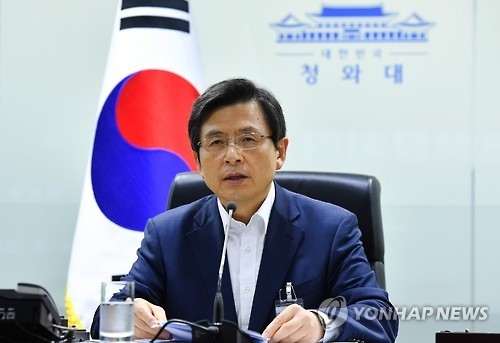