SEOUL, Sept. 9 (Yonhap) -- A local court on Friday sentenced a 26-year-old to two years in prison for breaking into a government complex to tamper with exam results earlier this year.

The Seoul Central District Court found the man, identified only by his surname Song, guilty of unlawfully entering the complex in central Seoul multiple times between February and March, and manipulating the results of the civil service examination he took.

"Song destroyed the fairness of the test, which is grounded on the idea of equal opportunity," the court said. "The nature of the crime is very bad in that it could lead to despondency of competitors with good intentions."

Prosecutors said the defendant entered the building a total of five times after he stole the identification card of a public official working in the building in February. He later stole two other ID cards.

The court, while finding him guilty of all the allegations raised, said it took into consideration that he has a record of receiving psychiatric treatment for obsession.

Following the incident, the government announced in April that it will strengthen security at the country's public buildings. 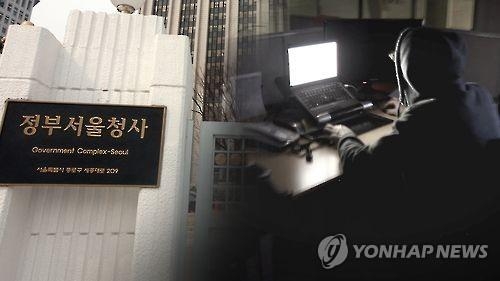