SEOUL, Sept. 9 (Yonhap) -- Whisky brands in South Korea have released affordable, smaller products to target a growing number of people who drink at home and cope with the enforcement of an anti-corruption law later this month, industry officials said Friday.

Lotte Liquor Co., a liquor unit under Lotte Group, said it has released "Scotch Blue King," which blended Scottish grain whisky and malt extract, at 16,500 won (US$15), removing unnecessary packaging to lower the price below $20.

The latest product comes after they launched a cheap whisky, "Scotch Blue Highball," at 1,265 won, a carbonated Scotch Blue extract in a 355 ml can to target younger customers who prefer low-alcohol spirits and those who drink alone at home.

"Whisky's image has been undergoing a change from an expensive liquor consumed by old businessmen in fancy bars in light of the changing drinking trend and the forthcoming enforcement of the anti-corruption law," an official at Lotte Liquor said. "We will continue to feature whisky for those who drink at home and enjoy the new taste of whisky." 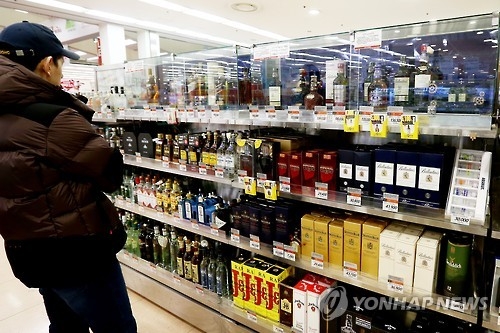 The Korean branch of British liquor maker Diageo said it plans to launch small-sized "Johnnie Walker Red" later this month, which is expected to be priced below $20.

The development represents growing changes ahead of the implementation of the law, which imposes tight limits on free meals and gifts that can be accepted by government officials, journalists and private school teachers to try to curb the deep-rooted tradition of excessive gift giving.

The maximum value of gifts a person subject to the law can receive has been set at 50,000 won, and cash gifts for events such as weddings and funerals have been fixed at no more than 100,000 won.