SEOUL, Sept. 9 (Yonhap) -- Two old boxing rivals have met again in the ring for the first time in 17 years, although they were busy showing respect to each other instead of trading punches.

Former World Boxing Association (WBA) super bantamweight champion Hong Soo-hwan reunited with his Panamanian opponent Hector Carrasquilla at a boxing gym in Seoul on Friday. This was their first encounter since 1999, when Hong went to Panama to meet Carrasquilla through a television show. However, they never wore boxing gloves back then as they explored the wild life on an island for the program.

This time, they wore boxing gloves and showed some weaving and punches. But there was no animosity, for they were now friends.

"Brother, it's nice to see you again," Carrasquilla said in Korean after hugging Hong. "I'm very happy to meet my friend and my brother."

Hong, who is 10 years older than Carrasquilla, also expressed his welcome with a smile.

"I feel happier than when I met him in Panama," Hong said. "Welcome, brother!" 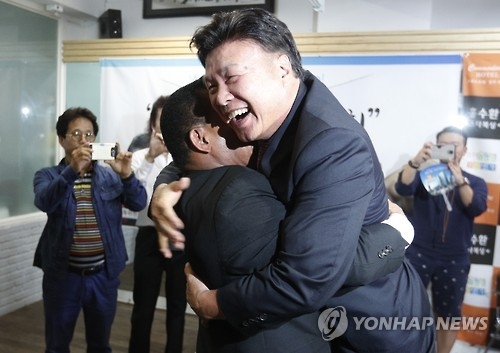 The two former boxers delivered a memorable bout in Panama City on Nov. 26, 1977. Hong was floored four times in the second round of the WBA title bout against home-crowd favorite Carrasquilla, but he got right back up each time. Just when the situation looked grim, Hong knocked out Carrasquilla with a left hook 50 seconds into the third round and claimed the world title.

Carrasquilla, 56, is in South Korea to observe the country's administration system as a Panamanian congressman. He is one of 33 individuals invited by the Korea Foundation, a leading public diplomacy organization in Seoul. After his arrival on Sunday, the boxer-turned-politician told South Korean officials that he wanted a reunion with Hong, who is now the head of the Korea Boxing Commission. The meeting was arranged a night before he flies back home.

"I can't forget the bout because it was a historic fight for both Panamanians and South Koreans," Carrasquilla said. "I just wanted to know how he was living today."

At the reunion, the two former boxers complimented each other on their performance and skills. Hwang Bok-soo, who lost to Carrasquilla in his bout in Seoul in 1978, was also present to share the memories.

"Hong knocked me out with one punch, so he is stronger than me," Carrasquilla said. "I just couldn't move my body even though I heard voices from fans to get up."

Hong replied, "You know the score was actually 1-to-4, so technically I lost to him."

Carrasquilla, one of the top Panamanian boxing prospects at the time, would have been the youngest world champion in super bantamweight class if he had beaten Hong. He had been 11-0, all victories by knockouts, prior to the championship fight.

Carrasquilla, however, said the defeat led him to pursue a successful career in politics. He added even if he lost, he earned a "good friend" in the end.

"My philosophy is that losing is another step toward winning," he said. "My loss to Hong was the cornerstone to my success."

Hong had nothing but respect for Carrasquilla's successful transition to politics.

"Let's switch our positions. If I was beaten like that, I'd never be like him at home," he said. "I was the champion in the ring, but outside the ring, he is the champion."

Carrasquilla encouraged Hong by saying that a South Korean can also become a congressman because Carrasquilla himself has already done it.

"If you enter politics, you first need to think about how to raise the quality of people's lives," he said. "But if he is to enter the politics, I can give him a campaign slogan, which is 'Hong Soo-hwan always wins.'"

Hong said he was thankful for the advice from Carrasquilla, but he will stick into boxing.

"Can I really become a politician here in my country?," Hong jokingly asked. "It sounds good, but I will be in the boxing community." 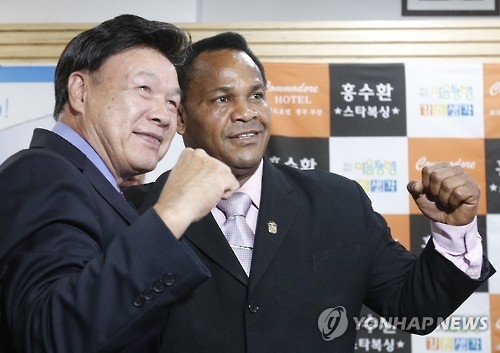