SEOUL, Sept. 9 (Yonhap) -- Prosecutors said Friday they will question Lotte Group founder Shin Kyuk-ho at his office for the second time later in the day over a string of corruption allegations, as they could not complete the interrogation on the previous day due to his poor health.

The Seoul Central District Prosecutors' Office said it is planning to carry out the questioning of the 93-year-old business tycoon at his office in Hotel Lotte in Seoul.

Prosecutors carried out the first round of interrogations on Thursday, but they are known to have not been able to go through all the questions because of Shin's health.

"The questioning was suspended as Shin's blood pressure increased and his body showed other abnormalities," said a company official, who asked not to be named.

He is known to be denying the allegations raised against him and the country's fifth-largest conglomerate. 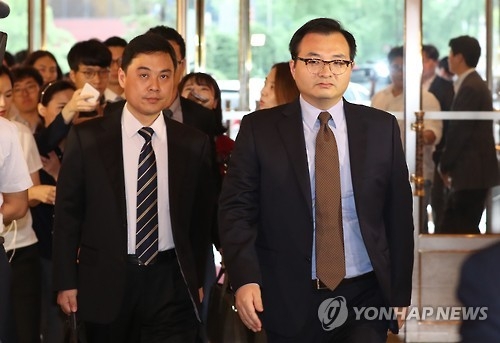