Cho Yoon-sun, appointed the new minister of culture, sports and tourism this week, visited the headquarters of the PyeongChang Organizing Committee for the 2018 Olympic and Paralympic Winter Games (POCOG) in PyeongChang, Gangwon Province, some 180 kilometers east of Seoul.

Yeo Hyung-koo, secretary-general of POCOG, and other staff members briefed Cho on PyeongChang's preparations for the first Winter Games in South Korea, and the second Olympics here after the 1988 Summer Games in Seoul. The PyeongChang Games will run from Feb. 9 to 25, 2018. 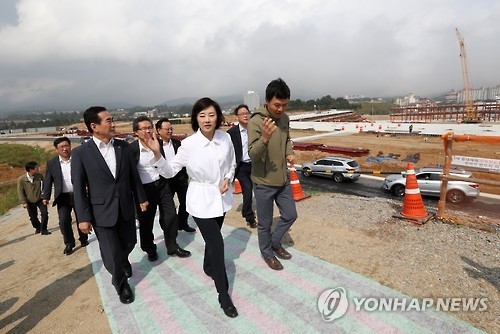 "If Seoul 1988 put South Korea on the global map, then PyeongChang 2018 should make us earn admiration from the rest of the world," Cho said. "The key is to portray South Korea as an advanced sports, cultural and tourism nation."

Cho noted the size of the budget should no longer be the measuring stick for Olympic Games and host cities must be more frugal.

"I am sure there will be difficulties along the way, but I hope you will all keep in mind how much the people wanted to bring the Winter Olympics home," Cho told the organizers. "As the Cabinet minister in charge, I will spare no efforts in providing necessary support."

After getting briefed, Cho visited construction sites for the PyeongChang Olympic Plaza, which will host the opening and closing ceremonies, and the Alpensia Sliding Centre, the venue for bobsleigh, luge and skeleton.

She hopped over farther east to Gangneung, a sub-host city that will stage hockey and skating competitions, to inspect venue construction.

Cho is also scheduled to monitor preparations for cultural and tourism programs during the Olympics.