SEOUL, Sept. 9 (Yonhap) -- North Korea on Friday said it "successfully" conducted a nuclear warhead explosion test, hours after an earthquake was detected near the country's nuclear site in the northeastern region.

"The nuclear test finally examined and confirmed the structure and specific features of movement of nuclear warhead that has been standardized to be able to be mounted on strategic ballistic rockets," read an English statement issued by the North's nuclear weapons institute carried by the Korean Central News Agency (KCNA).

It said that the standardization of a nuclear warhead will enable North Korea to produce as many "smaller, lighter and diversified" nuclear weapons as it wants.

"This has definitely put on a higher level (North Korea's) technology of mounting nuclear warheads on ballistic rockets," the statement said.

The North's nuclear provocation came after North Korean leader Kim Jong-un ordered his officials in March to conduct a nuclear warhead explosion test and more test-fires of ballistic missiles as soon as possible.

South Korea's defense ministry on Friday said the yield of the blast is presumed to have been 10 kilotons, the largest ever conducted by Pyongyang. 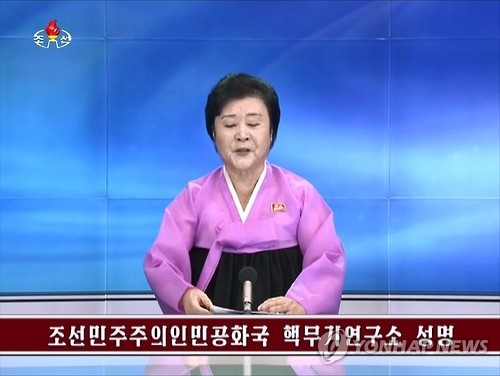 The nuclear test came eight months after the country conducted what it called a successful test of a hydrogen bomb in January. It was also timed with North Korea's 68th anniversary of the establishment of the regime.

In March, the U.N. Security Council slapped its toughest sanctions on Pyongyang for its nuclear test and long-range rocket launch early this year. Pyongyang also carried out nuclear tests in 2006, 2009 and 2013.

North Korea has threatened to take "multi-phased" measures to double its capability for nuclear attacks if the United States maintains its hostile policy toward Pyongyang.

The repressive country has claimed technical advances in its nuclear and missile programs, saying that it has the full capacity to stage preemptive nuclear strikes against the U.S.

The country is seeking to develop a nuclear-tipped intercontinental ballistic missile (ICBM) capable of hitting targets on the U.S. mainland.

To this end, North Korea has been focusing on making a nuclear warhead small enough to be mounted on a ballistic missile and developing means of delivery.

Experts said that the latest nuclear test is aimed at showing the international community that it is unfazed by the sanctions regime. It also targets strengthening internal solidarity as more North Koreans including members of the elite have chosen to flee the nation, they added.

"North Korea seems aimed at quickening the timing of bolstering nuclear capability," said Kim Yong-hyun, a professor of North Korean studies at Seoul's Dongguk University. "The North appears to send the message that international sanctions have no impact on it."

Since taking office in late 2011, the North's leader has ordered the execution of more than 100 officials in a bid to cement his iron-fist rule.

More and more North Koreans have defected to South Korea as the North's leader is strengthening his reign of terror.

Thae Yong-ho, a former minister at the North's embassy in Britain, recently defected to South Korea with his family, making him one of the highest-ranking North Korean officials escaping to the South.

Yang Moo-jin, a professor at the University of North Korean Studies, said that Kim appears to show that he has absolute control of his country, shrugging off speculation that there are signs of cracks in the regime.

"Internally, Kim Jong-un seems to highlight his image as a powerful military leader through the nuclear test," he said. "He is also sending a message to the outside that North Korea is a nuclear power nation."

Seoul's unification ministry said that it will seek to cooperate with the international community to craft out new sanctions against North Korea.

The ministry said in a report to lawmakers that the government will faithfully implement the U.N. Security Council's sanctions resolutions and Seoul's own punitive actions.

"The government will strengthen its surveillance over North Korean products being smuggled into the South and keep the suspension of inter-Korean exchanges," the ministry said.

In March, it also announced its own punitive sanctions on Pyongyang including blacklisting scores of key North Korean officials and organizations suspected of being involved in developing nuke and missile programs.