"We can no longer tolerate the North's nuclear test," said Lee Ok-nam at conservative civic group Citizens United for Better Society. "The government should come up with effective measures, instead of just verbally saying that it will take 'stern' or 'decisive' steps."

Lee said South Korea should be more active in informing the reality of North Korea to the outside world and strenghthen international sanctions levied on the reclusive country.

"(The South Korean government) should promptly deploy the Terminal High Altitude Area Defense (THAAD) system and get down on measures to bring fundamental change to the North Korean regime," the Korea Freedom Federation said.

Kim Sam-soo at progressive Citizens' Coalition for Economic Justice, meanwhile, questioned the effectiveness of the country's current policy towards Pyongyang.

"The incident shows that (South Korea) should approach denuclearization through other means, such as a dialogue or a negotiation," he said, urging the need to normalize the relation between the two Koreas.

North Korea conducted its fifth nuclear test earlier in the day on the occasion of the 68th anniversary of the regime's founding. 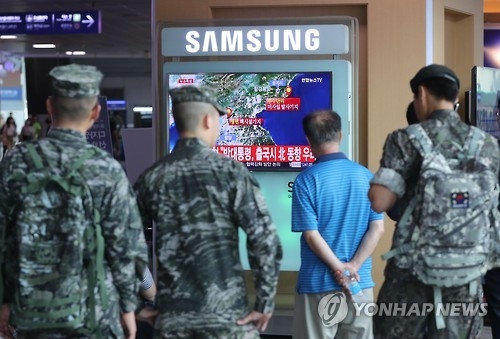