North Korea said earlier it has "successfully" conducted a nuclear warhead explosion test, hours after an earthquake was detected near the country's nuclear site in the northeastern region.

"The government will be more vigilant than in any other situation as North Korea's provocation will possibly stir up market volatility in a short term," Finance Minister Yoo Il-ho said during a parliamentary hearing. "We will take action in accordance with the contingency plans." 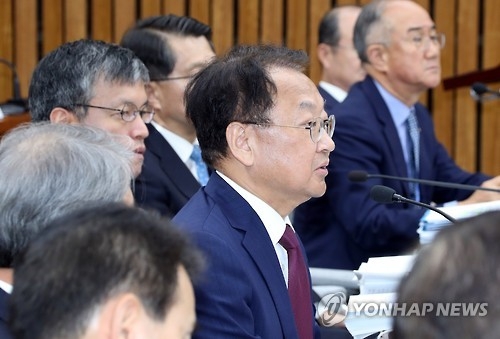 At the same time, an emergency meeting of economy-related officials was convened to look into the impact of the North's fifth nuclear test on the local equity market.

"(The North test) will have limited impact on the South Korean and international financial markets," said Vice Finance Choi Sang-mok who presided over the gathering involving vice president of the Bank of Korea and vice chairman of the Financial Services Commission. "The local stock and foreign exchange markets have remained firm since news reports on the nuclear test."

Nevertheless, Choi stressed that the government will tighten monitoring on the market to fend off any possible fallout from the latest North Korean provocation, coupled with a possible U.S. rate hike.

"Uncertainties have been escalating in the global financial market as the U.S. central bank is set to raise the base rate," said the official. "The government will form a task force to keep close tabs on the financial market around-the-clock and take immediate action if necessary."