The spike in people calling for independent nuclear capabilities is also tied to South Koreans wanting to become more independent on national defense. Despite repeated warnings and stringent sanctions, Pyongyang has carried out underground nuclear tests in 2006, 2009, 2013 and twice this year.

People on local social media said with the steady stream of North Korean provocations and threats, the seemingly extreme opinion that Seoul should be armed with its own nuclear weapons has been spreading throughout the public and gradually gaining acceptance.

This development has even led a group of hawkish lawmakers from the ruling Saenuri Party to launch a group that aims to expand public discourse on nuclear armament and seek to win broader support.

Shortly after the fifth test by Pyongyang, South Korean Internet users filled major online portals with posts that urged Seoul to better prepare to defend itself, claiming Pyongyang's threat just became more of a reality. Many have said that the surest way to cope with the North’s evolving nuclear threat is for the country to become a nuclear-armed state.

"I strongly support South Korea's nuke armament. As I should know how to protect myself, we should defend our own country. An independent defense is the answer," a person with the ID "rosi****" said on the country's top portal Naver.

Another user dubbed "ljyo****" claimed that peace is only made possible through military power, lending support to the plan.

"All the dollars provided to Pyongyang over past years have come back to us in the form of the North threatening us with missiles and nukes," the user "kyun***" said.

User "hhsc****" said the South Korean government should take a much firmer stand on the North. The person said verbal sanctions have proven to be ineffective and that something stronger is needed.

Others still said that ordinary people and the country's leaders need to be on guard and ready to deal with the North, which has done nothing but threaten the South and the rest of the world. 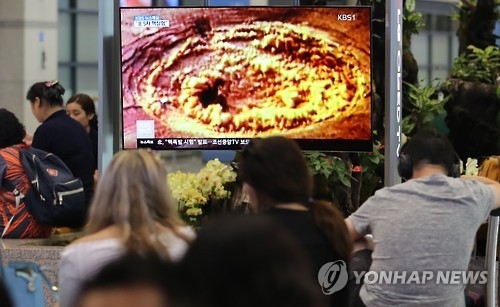